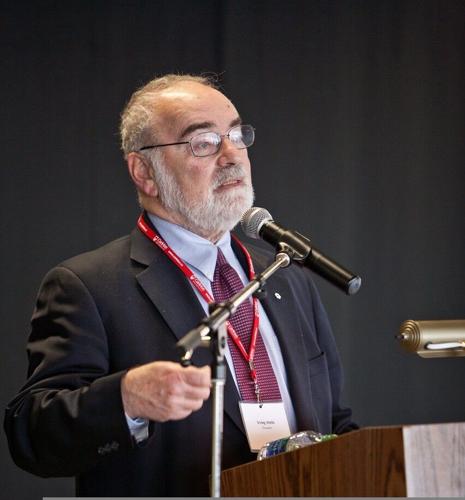 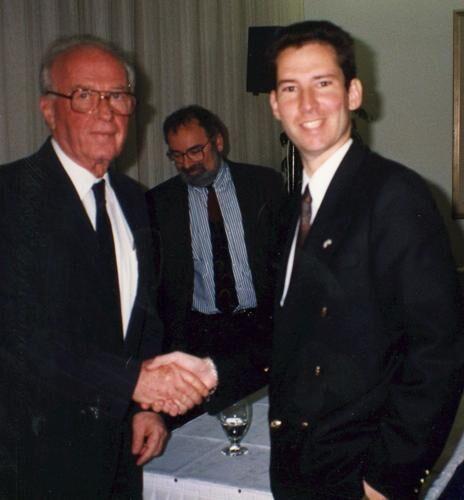 That is me with the late Yitzhak Rabin and Irving in the background.

A legendary Canadian Jewish figure has left us.

I was saddened to learn of the passing of Irving Abella,82,  an author, historian, university professor and community leader. During his three year term as president of the Canadian Jewish Congress, from 1992 to 1995, the two of us were in nearly daily contact. I was the national director of communications for the CJC, then the highly respected national representative body of the Jewish community.

When I first joined the CJC in 1988, my boss Jack Silverstone advised me that Professor Abella was coming to our Montreal office from his Toronto base for a meeting with filmmaker Alan Handel to discuss a documentary he was working on with us on the Holocaust. I had read his 1982 book None is too Many: Canada and the Jews of Europe 1933-1948, co-written with Harold Troper. It shed light on the largely untold story of Canada's anti-immigrant policies toward persecuted Jews and helped persuade future governments to welcome migrants fleeing war. Wow, I was so excited to meet him in person.

In 1992, when Irving was elected national president, e-mail was really not part of our lives nor were cell phones. We used fax machines and traditional telephones. The CJC was a very high profile organization and as a result we got a lot of media attention. Virtually each day I’d produce press releases, fax them to Irving and wait for his call for any changes. The media loved interviewing him. He was a bonafide quote machine.

I travelled across the country with Irving. When I’d call a newspaper editorial board and told them that I wanted to arrange a meeting with Irving Abella, the doors swung wide open. The same could be said for the federal government, initially Prime Minister Brian Mulroney and the Liberals’ Jean Chretien and members of cabinet and the opposition. A press conference with Irving as the speaker was a guaranteed draw. Ditto for public lectures.

In 1993 Irving led a memorable mission to Poland and Israel to mark the 50th anniversary of the Warsaw Ghetto Uprising. This was an experience in my life that I will never forget. Included on our delegation was a large number of Holocaust survivors and their families. For almost all of them, this was their first time back to Poland after surviving the death camps – Majdanek, Treblinka and Auschwitz-Birkenau. It was my job to have these individuals bravely tell their stories to the media. We actually visited each of the camps. And it was Irving providing that calming influence . After Poland, like the March of the Living, we all went to Israel where we met with the Prime Minister at the time, the late Yitzhak Rabin and members of cabinet.

During Irving’s last year as president, I organized a mission of Canadian Jewish journalists to Switzerland. Irving agreed to lead the trip. It was a fabulous experience to spend 10 days with the editors and chief reporters of every Jewish print publication in Canada. A highlight of the trip was a visit to the International Committee for the Red Cross in Geneva. Even there, Irving’s name opened the door to an in-person meeting where he took the case of Magen David Adom (Israel’s equivalent of the Red Cross) not being granted entry to the international body.

When I left the CJC to work at the English Montreal School Board in 1998, one of my first calls was to Irving. “Can we fly you in to speak to teachers about the Holocaust and Nazi war criminals in Canada?” I asked.

“I will do it on one condition,” Irving responded. “You have to order me some Schwartz’s smoked meat.”

I told the organizer of the session Irving’s terms and she catered a lavish Schwartz’s lunch for all the participants. Irving was in heaven. And yes, he left the teachers speechless and wishing his address would never end.

Last year I was back in touch with Irving, having organized a series of zoom calls between former members of CJC leadership. My goal was to see how we could cement the legacy of CJC. He attended a number of sessions and when we formally established the Canadian Jewish Community Forum (CJCF) the plan was to have some keynote addresses by Irving. He was first on everyone’s list.

A few months ago I got a call from a national journalist, advising me that Irving was not well. I tried to reach him unsuccessfully. Now we are left to mourn a great man!

Irving leaves his wife Rosalie, a recently retired member of the Supreme Court of Canada, his two sons and his grandchildren.

"Irving Abella was a quintessential Canadian Jewish leader," said Bernie Farber, former CEO of the CJC and presently the chair of the Canadian Anti-Hate Network. "He was wise, articulate, engaging, bold and forward-thinking. His inspirational leadership has become his legacy. For me, he was my mentor and teacher. May his memory always be for a blessing."

Added my good friend and former CJC Executive Vice-President Jack Silverstone: “He was a brilliant academic and a great guy. It was a privilege to work with him.”

Upon learning of his passing, Shimon Koffler Fogel, President and CEO of the Centre for Israel and Jewish Affairs, released the following statement: "Itche Abella’s contributions as a Canadian and as a Jew cannot be overstated nor can they be divided. He used his talents as a historian to protect and preserve Canada’s Jewish history, and to ensure that our community had a voice. His commitment to holding the government of Canada accountable for their WWII immigration policy, has shaped the lives of generations of refugees and immigrants that have benefitted from the critical review of a flawed system. A champion of the ordinary man, he chronicled and fought for workers’ rights. His legacy of nearly five decades of Jewish scholarship and community service is one that inspires and will continue to shape the field of Jewish studies, which he pioneered. His impact on Canadian Jewish life is immeasurable and will live on for decades.”

It is clear that the legacy of Irving Abella will live on forever!