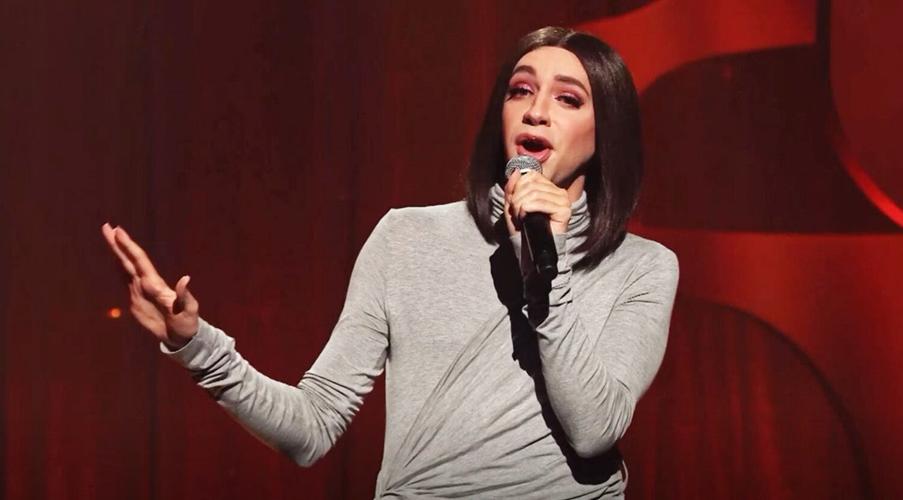 Montreal’s Tranna Wintour appears in one of the eight one-hour specials, which made their debut on September 13 and air every Tuesday night at 9 p.m. 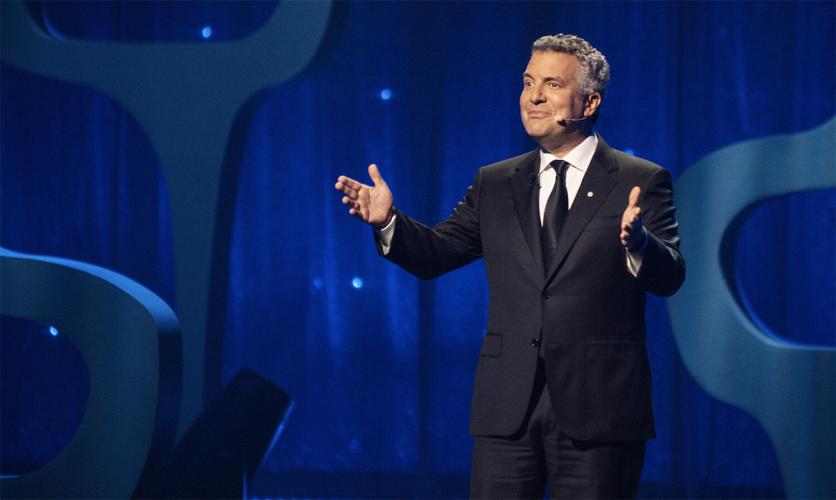 Iconic Canadian funny man Rick Mercer serves as host, delivers his own performance, and introduces the invited comics who do their bits.

If you haven’t yet heard the name Tranna Wintour, you’re either leading a far too sheltered life or you’re definitely not from around these parts. Those in the know will be happy to hear that the Montreal performer, and one of the very few transgender stand-up comics around, is part of the slate of Canadian talent invited to appear on CBC Television’s Comedy Night with Rick Mercer.

The eight one-hour specials, which made their debut on September 13, air every Tuesday night at 9 p.m. on CBC Television and then stream on CBC Gem. The show can be described as a television version of Comedy Night in Canada with Rick Mercer, a staple of Just For Laughs tours over the past several years. The tapings — which also featured the likes of Sophie Buddle, DeAnne Smith, D.J. Demers, Robby Hoffman, Eman El-Husseini, Ali Hassan, Dakota Ray Hebert, Dave Merheje, Sean Cullen, and more — took place last summer in Toronto during one of the many insufferable COVID waves and with health protocols still in place. Nevertheless, Wintour said it was good for their collective souls. ‘’For a lot of us, it was like our first big gig after the first phase of the pandemic, so it felt exciting and really joyful to just be with everyone on that beautiful stage.’’

During the lockdowns, Wintour — who is also a singer, writer, and producer — kept busy by writing, co-creating a comedy television series that is in its development stages, and co-hosting a popular weekly CBC conversational podcast called Chosen Family with her queer BFF, Thomas Leblanc.

The Concordia University graduate’s (BA 10) first steps into the world of stand-up came during an open mic night some nine years ago. ‘’I had this sort of epiphany, largely through watching Margaret Cho and Sandra Bernhard — who are my two comedy heroes,’’ said Wintour. ‘’I thought, ‘Oh my God, this is what I’ve been looking for my whole life. This is the outlet.’ …But it still took a year for me to work up the courage to actually do it.’

While her material has a pop culture dimension that pokes fun at celebrity and the superficiality of contemporary culture, her work is also quite personal, bringing in elements of her own life.

I thrive on freedom and confidence, says Lena Dunham

‘’I definitely talk about my experience in the world as a trans person, but never in a heavy-handed way because I’m really not up there with a sort of agenda beyond wanting to make people laugh,’’ said Wintour, whose stage name — for those yet to notice — is a subversive wink at long-time Vogue magazine editor-in-chief, Anna Wintour. ‘’It’s all in the spirit of having a good time, but I think that just organically, people who are very straight, cisgendered, and have very heteronormative lives, sometimes when they see me — and I can say this because I hear from them directly — they do often leave with a better understanding, or just a realization that there is actually not that much that’s different between us.

Well known on the local comedy circuit, Wintour’s history of doing Zoofest and OFF JFL shows made her a familiar face to the good people at Just For Laughs, who co-produce Mercer’s TV show. She has also been taking full advantage of the fact that her fluency in the language of Charlebois has given her a platform on the other side of the linguistic divide, doing shows and even earning a spot on Big Brother Célébrités, Quebec’s version of Celebrity Big Brother. ‘’That really opened up really big doors for me on the French side, so I’ve actually been doing a lot in French. I did a Just For Laughs gala in French last year and I did my second one this year,’’ said Wintour, adding, ‘’I also did my first English Just For Laughs gala this summer. So, it’s been a really amazing year. I feel like, finally, the nine years of work are just now paying off.

As for the format of Comedy Night with Rick Mercer, it’s pretty straightforward. Mercer — the iconic Canadian funny man known for iconic Canadian television programs like This Hour has 22 Minutes, Talking to Americans, Made in Canada, and The Rick Mercer Report — serves as host, delivers his own performance, and introduces the invited comics who do their bits. The series also features one-on-one conversations between Mercer (did I mention his iconic status?) and guests. ‘’It’s nice to have the comedy and then afterwards get to know the comedians a little bit more,’’ said Wintour.