Born 74 years ago in Saint Boniface, Manitoba, Chard Chénier was not only exposed at an early age to the art of Canada’s Indigenous peoples, but to the natural connection between the land, the wind, the sky, and the stars. And you can see it on his canvases. 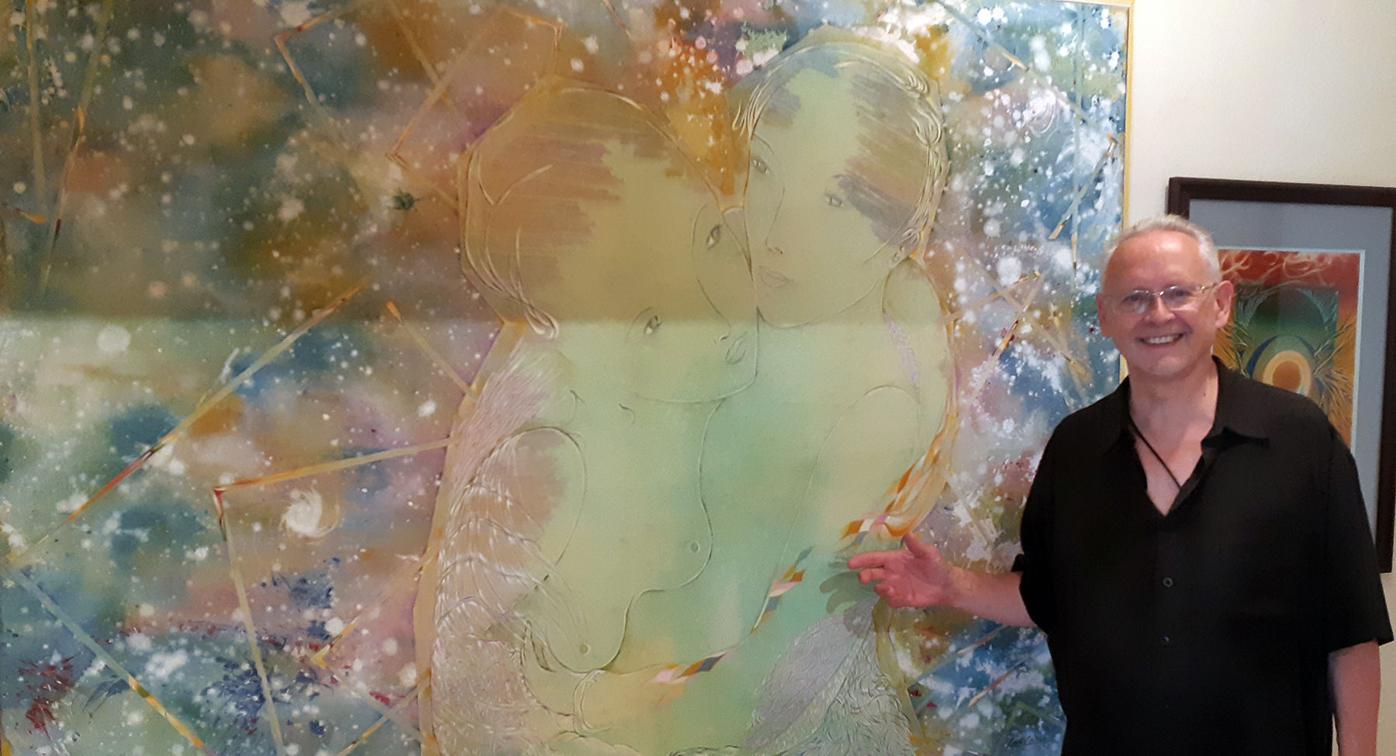 His paintings are a mixture of contemporary, mostly abstract art, organic forms, celestial images, and some figurative work.

Walking through Richard Chénier’s Snowdon neighbourhood home is like walking through a lush art gallery, with pieces in every room and paintings on every wall.

Walking through Richard Chénier’s Snowdon neighbourhood home is like walking through a lush art gallery, with pieces in every room and paintings — his own — on every wall. One room is used solely as a gallery where he greets potential clients while another is a typical artist’s work studio.

A few weeks removed from his last exhibition at Galerie Espace on St. Laurent Blvd., Chénier, better known as Chard, presently has some of his work — a mixture of contemporary, mostly abstract art, organic forms, celestial images, and some figurative work — on display until the beginning of October at Café 92 on Sherbrooke St. W.

Born 74 years ago in Saint Boniface, Manitoba, Chénier was not only exposed at an early age to the art of Canada’s Indigenous peoples, but to the natural connection between the land, the wind, the sky, and the stars. And you can see it in his work.

Although the Montreal artist never formally studied art, he said he had the good fortune as a teenager to have taken three or four years of watercolour classes from someone who had studied in Paris. “I wanted to study art but my parents were poor. They were working class French Canadians and not very well educated so the idea of sending me to an art school when I was 15 or 16 years old was out of the question and beyond their finances. So I basically ended up being a self-taught artist.”

A big fan of the great Sonny Terry, Chénier also started teaching himself blues harmonica around age 13 and began getting a lot of positive feedback on his music. Positive enough that in the mid 1960s he embarked on a budding musical career. But by decade’s end, chronic health problems forced him to drop out of show business — at the tender age of 22. Some 20 years later, he was finally diagnosed to have been suffering from a rare genetic blood disorder that is now under control.

“I was constantly collapsing from exhaustion and then building myself up. It was like a rollercoaster,” he explained. “I suppose I could have had a music career but my health was getting worse and worse so I just gave up on that and focused on the art because at least I could stay home and paint.”

During the 1970s, Chénier spent several years living in Vancouver and shared a studio with a Haida artist, which also added to his set of influences. These days he fluctuates between a variety of styles and subjects. A jazz, blues, and folk lover at heart, Chénier’s painting styles often match his musical moods.

“Music is a big part of who I am and what I do,” he said. “On Monday I might listen to [John] Coltrane and then the painting will be a jazzy abstract. Another time it will be some Buddy Guy and I’ll do a bluesy portrait of somebody.”

In addition to the styles and techniques of his favourite artists, Chénier’s self teaching also included the backgrounds and lifestyles of masters like Rembrandt, Van Gogh, Francisco Goya, Diego Velázquez, and Leonardo da Vinci.

“I read their biographies and continue to read about them. As a matter of fact, one of the things that keeps me going is knowing what they went through to get to where they are,” he said. “That gave me some kind of courage because I saw what they went through and what they did so I persevered. A lot of self taught artists have done that.”

While the shutdowns caused by the COVID pandemic took its toll on art galleries, large and small, and the artists who displayed and sold their work through them, Chénier used his perseverance to find other ways to sell his art, either renting the occasional space, hanging his work in popular establishments around NDG, and welcoming potential buyers to appointment-only, COVID-sensitive, socially distanced viewing in his home gallery. He also uses his website, social media like Facebook and LinkedIn, as well as a monthly newsletter, to let people see, and hear, what he is up to.

“The website is nice because it also gives you a taste of my music and my live performances at various blues festivals,” said Chénier, adding, “And you can get links to my latest releases. So the website is very useful to get people in touch with me.”