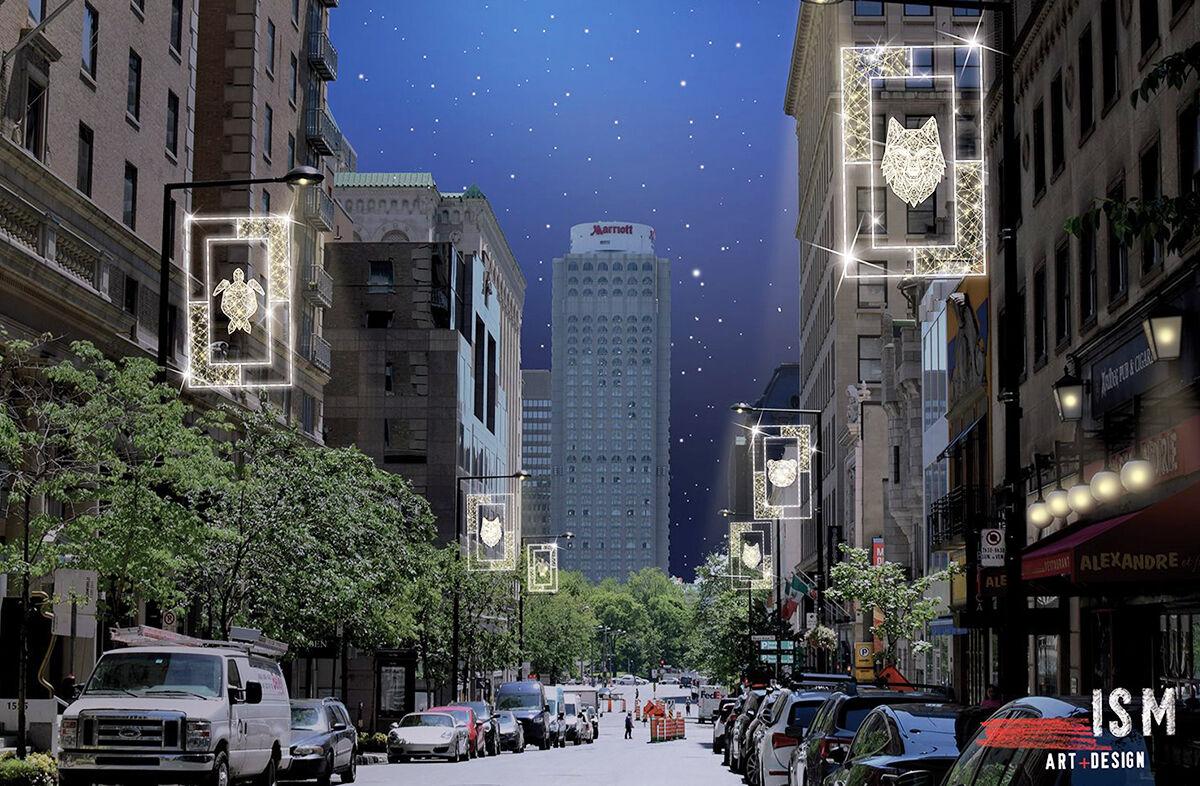 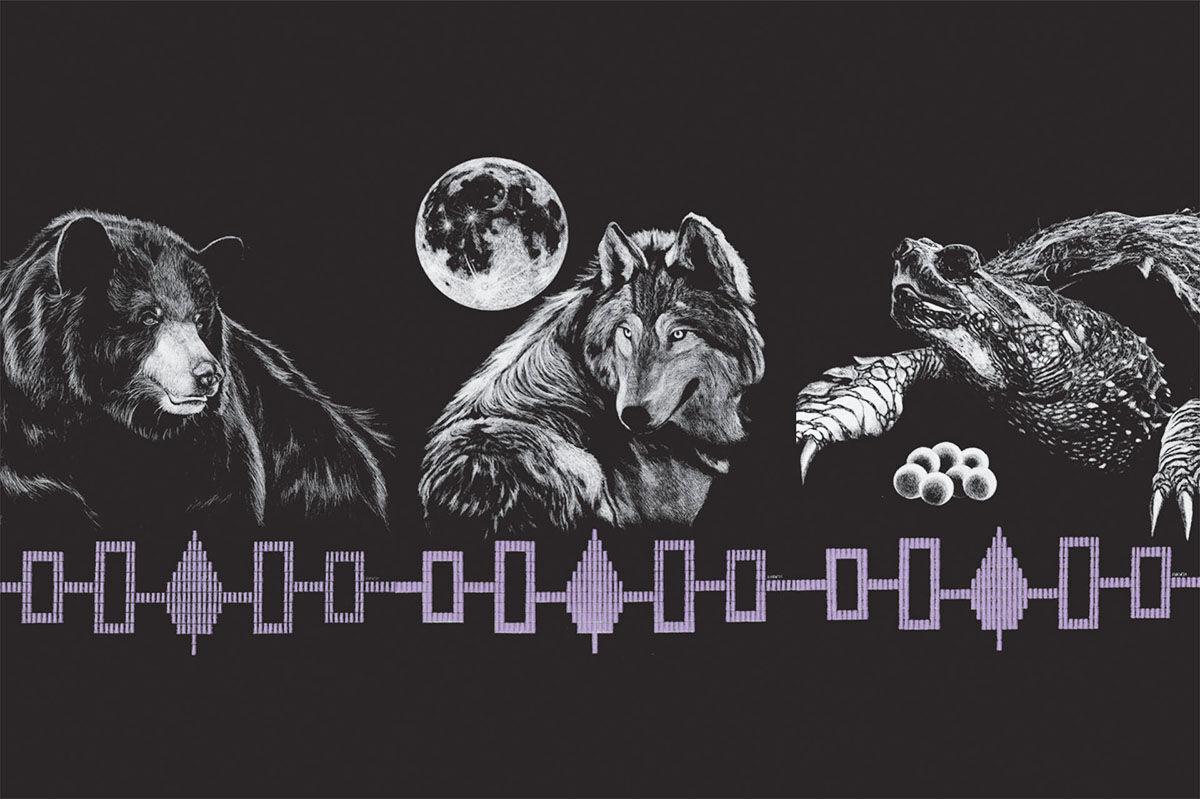 Kanien’keha:ka Onkwawen:na Raotitiohkwa Language and Cultural Center (KORLCC) commissioned Kaiento:ton Kyle Williams to design 4 art works for the initiative, the Bear, Turtle, and Wolf clans as well as The Peacemaker.

Kanien’keha:ka Onkwawen:na Raotitiohkwa Language and Cultural Center (KORLCC) commissioned Kaiento:ton Kyle Williams to design 4 art works for the initiative, the Bear, Turtle, and Wolf clans as well as The Peacemaker.

In the summer of 2018, thousands of objects crafted by the St. Lawrence Iroquois were discovered under the intersection of Peel and Sherbrooke. Two years later, this major archaeological discovery inspired ISM Art et design, as part of a call for projects launched by the SDC Montréal centre-ville for the new light decorations for one of Montreal’s busiest commercial thoroughfares.

In addition to spreading holiday cheer, the lights on Peel Street honour the First Nations who inhabited the land before us, as well as the animals that shared their everyday lives, animals that represent the Rotinonhsión:ni Clan System and have a strong significance in Native American culture.

The turtle, symbol of perseverance, the wolf, symbol of loyalty, and the bear, symbol of strength, are at the heart of these light installations created by ISM Art & Design, in collaboration with Montreal’s Kahnawake Mohawk community.

“Rather than speak for them, we wanted to make sure that the First Nations were aware of the project and that it corresponded to the message they wanted to convey,” points out Cristina d’Arienzo, Director of Operations for the Montreal Centre-ville SDC, who initiated the project earlier this summer. “We organized a meeting with the Kahnawake council chiefs, which allowed us to better position the project and give it a stronger cultural foundation. We asked them if they would share their story with us and explain the symbolism behind the three animals that represent the Mohawk nation.”

Born of this collaboration, the decorative lights on Peel Street portray the rich history of the area and revisit the traditional holiday lights. Created using luminous points, the faces of the animals represent the notion of a starlit sky, as understood by Aboriginal peoples in Canada.

Each animal is placed in the centre of a luminous rectangular frame, reminiscent of the famous shape portrayed on the Hiawatha belt, symbol of the Iroquois confederation.

More than just lights, the idea is to delve into a lesser-known part of history.

The installations are equipped with QR codes that, when scanned, redirect visitors to informative platforms.

“It’s an interesting opportunity that allows people to learn more about our community, our history, and the origin of our clans,” explains Kahsennenhawe Sky-Deer, council Chief for the Kahnawake community involved with the project. “Our nation is close by, just past the Mercier Bridge, on the other side of the St. Lawrence, and yet, so few people know our history.”

Programmed to run UNTIL February 15, Lights on Peel Street is part of a larger project that extends well past the holidays.

The City of Montreal is thinking about using urban furniture to display the archaeological treasures discovered beneath Peel Street. This project is part of Montreal’s bigger reconciliation project. The City of Montreal’s goal is to work directly with the First Nations in order to share the island’s thousand-year-old history. Before discovering the future projects developed as part of Peel Street’s makeover, it was essential to create some holiday magic, particularly during these difficult times. These Instagram worthy installations steeped in history will certainly accomplish that.

“It’s a great opportunity for people to stroll through our downtown core,” added D’Arienzo. “And we hope everyone takes the time to learn more about our city’s history through these beautiful installations.”

Lights on Peel is an initiative of SDC Montréal centre-ville in partnership with the Mohawk Council of Kahnawake, and the Kanien’kehá:ka Onkwawén:na Raotitióhkwa Language and Cultural Center (KORLCC), with the support from the borough of Ville-Marie.