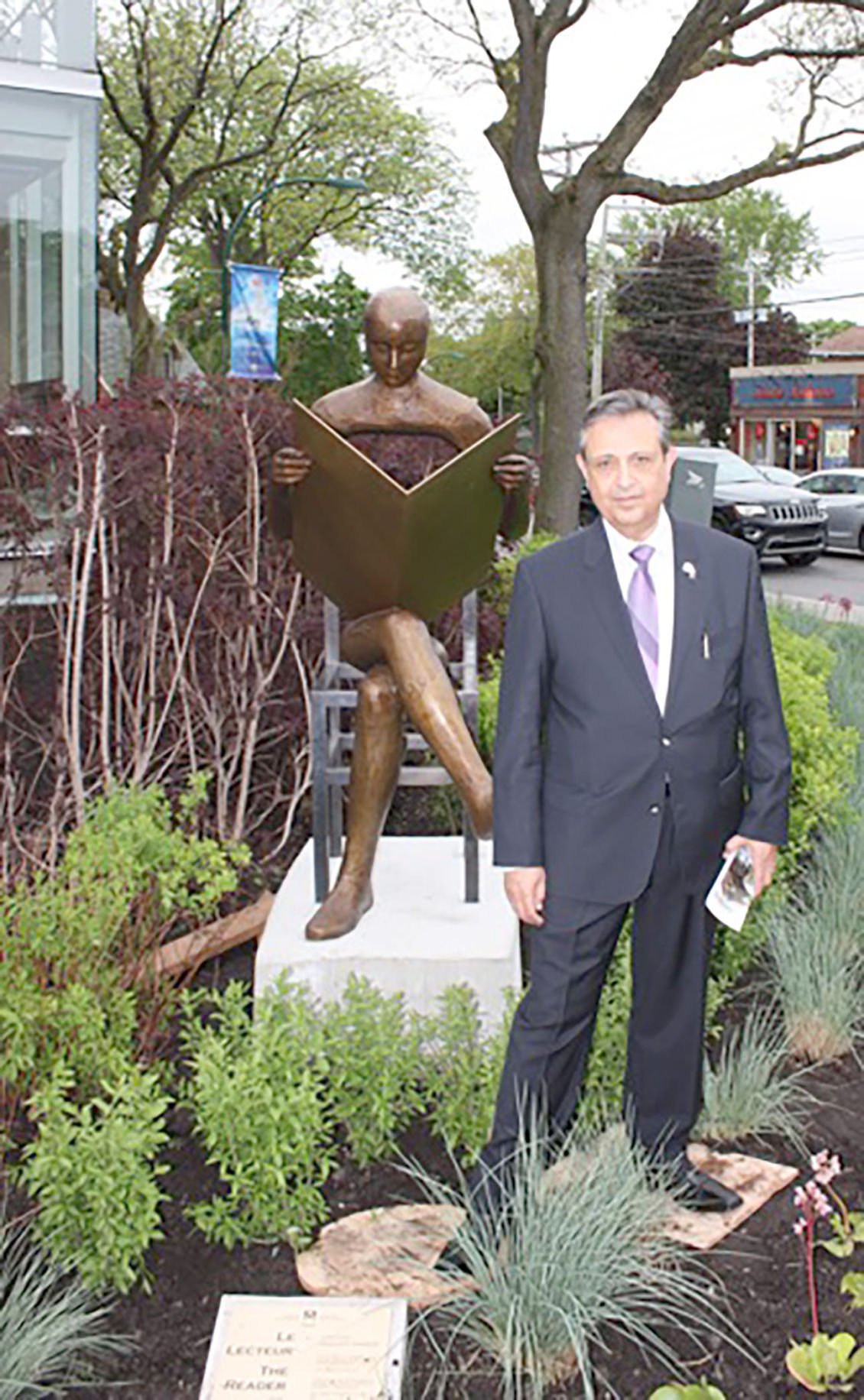 Dr. Megerditch Tarakdjian with his sculpture titled, The Reader, which sits in front of the library in the Town of Mount Royal. 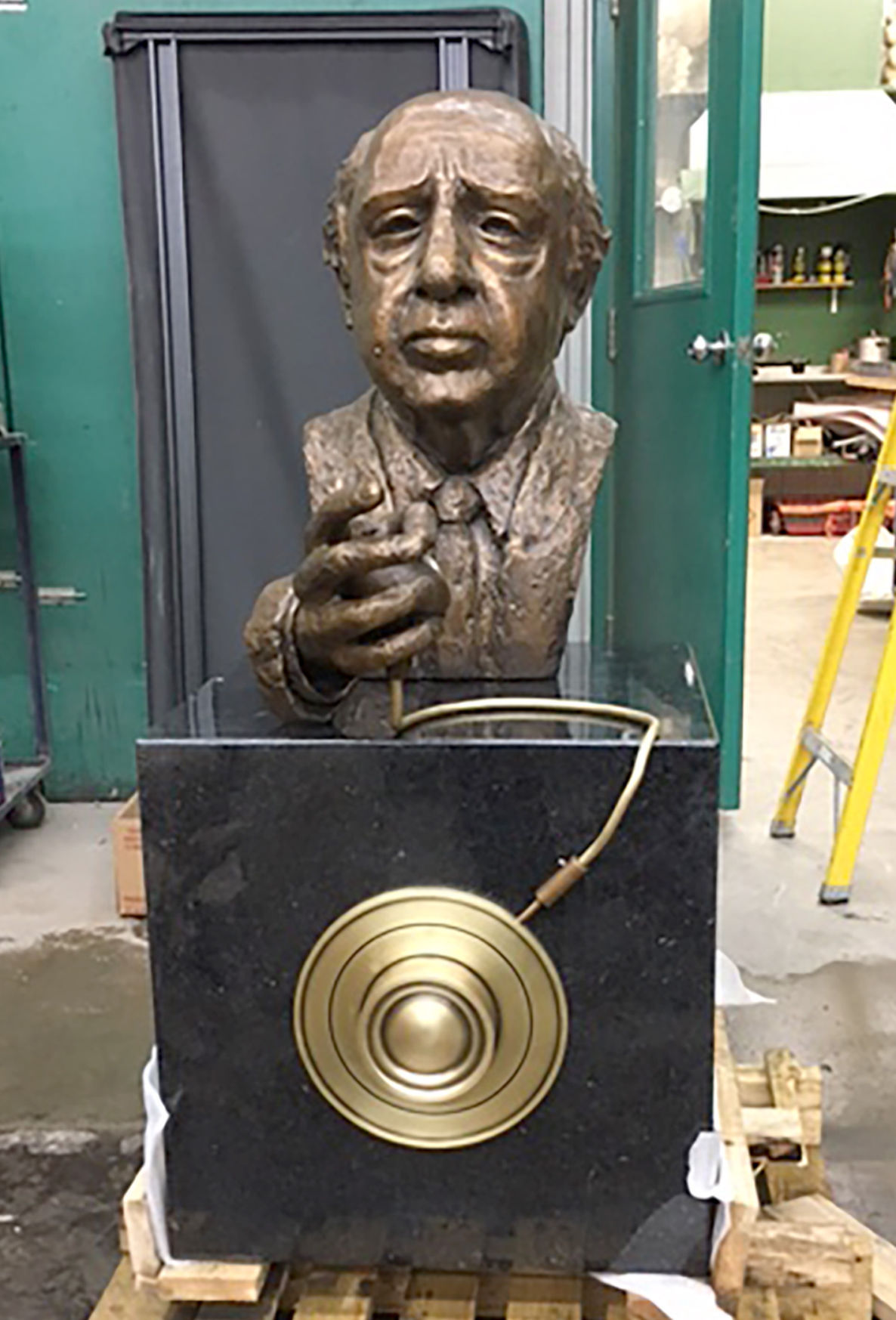 Dr. Megerditch Tarakdjian with his sculpture titled, The Reader, which sits in front of the library in the Town of Mount Royal.

There’s a new eye-catching bronze sculpture of a person sitting in a chair with legs crossed absorbed in a book, in front of the main entrance of the Reginald J. P. Dawson Library in the Town of Mount Royal. Titled The Reader, it’s the proper fitting for a library’s entrance.

The sculpture was donated by Dr. Megerditch Tarakdjian on the occasion of the library’s 50th anniversary. Tarakdjian, a resident of the Town, is a family doctor who, at the end of a four-day week, spends the weekend producing intricate sculptures. Tarakdjian, of Armenian descent, was born in Syria and has been living in Montreal since 1982. At a very young age he developed a passion for painting and went on to study at the Saryan Academy of Arts in Aleppo, Syria. However, his parents did not believe he could earn a living as an artist and persuaded him to instead pursue a career in science. It was only after becoming a successful practitioner of family medicine that Tarakdjian again found time to return to his love of sculpting and painting.

I was present when the work was unveiled on May 26 where in attendance were friends and members of his family as well as several dignitaries, including Quebec Minister of Energy and Natural Resources, Pierre Arcand, and Ambassador of the Republic of Armenia to Canada, H.E. Armen Yeganian. Town Mayor Philippe Roy had this to say: “It is a splendid sculpture whose theme could not be more appropriate. Each visitor to the library will now be greeted by this bronze, which combines beauty and depth. Nor will the work escape the attention of passers-by, be they on a bicycle, behind the wheel or on foot.”

Guests also had an opportunity to admire several other of the doctor’s creations in the library’s exhibition hall.

I became acquainted with Tarakdjian six years ago when a mutual friend, Berge Missakian, an accomplished artist living in Montreal West, informed me that the doctor was publishing a book of his art and asked if I would be willing to write the preface. Over coffee and pastry at the doctor’s home studio, I was impressed with many of his pieces. I was taken with his ability to capture a moment in time about everyday human experiences. As well as being precise in their detail, his sculptures evoke human emotions from the viewer.

“Producing art is of paramount importance to me,” he said. “It offers me a great amount of joy, not only as a hobby but rather an ongoing devotion to transcribe my ideas and feelings into the visual form of art.”

He then added, “This process provides a much sought after sense of serenity at the end of a working day charged with considerable stress.”

It was then that I agreed to do his book’s preface.

Another milestone for the doctor will take place Friday, June 9 in Ottawa. His bronze and granite likeness of the renowned Armenian-Canadian photographer, Yousef Karsh, one of the most prominent portrait artists of the 20th century, will be unveiled at its permanent location in front of the Château Laurier Hotel. Karsh and his wife lived there for 18 years.

“He was a big man and I admired him. And when I read his biography, I was even more impressed,” Tarakdjian said. “He was a person with a big heart and pride for Canadians and the Armenian community here, too. When the Armenian Ambassador to Canada approached me and asked me if I could work on this, I said, ‘Of course.’ I think we have to give back to the community.”

The ambassador concurred. “We have such good relations with Canada. Canada was such a big protector of human rights and it recognized the genocide on so many occasions. So this is a little token of appreciation — a gesture from the Armenian people to the people of Canada. It’s from people to people.”