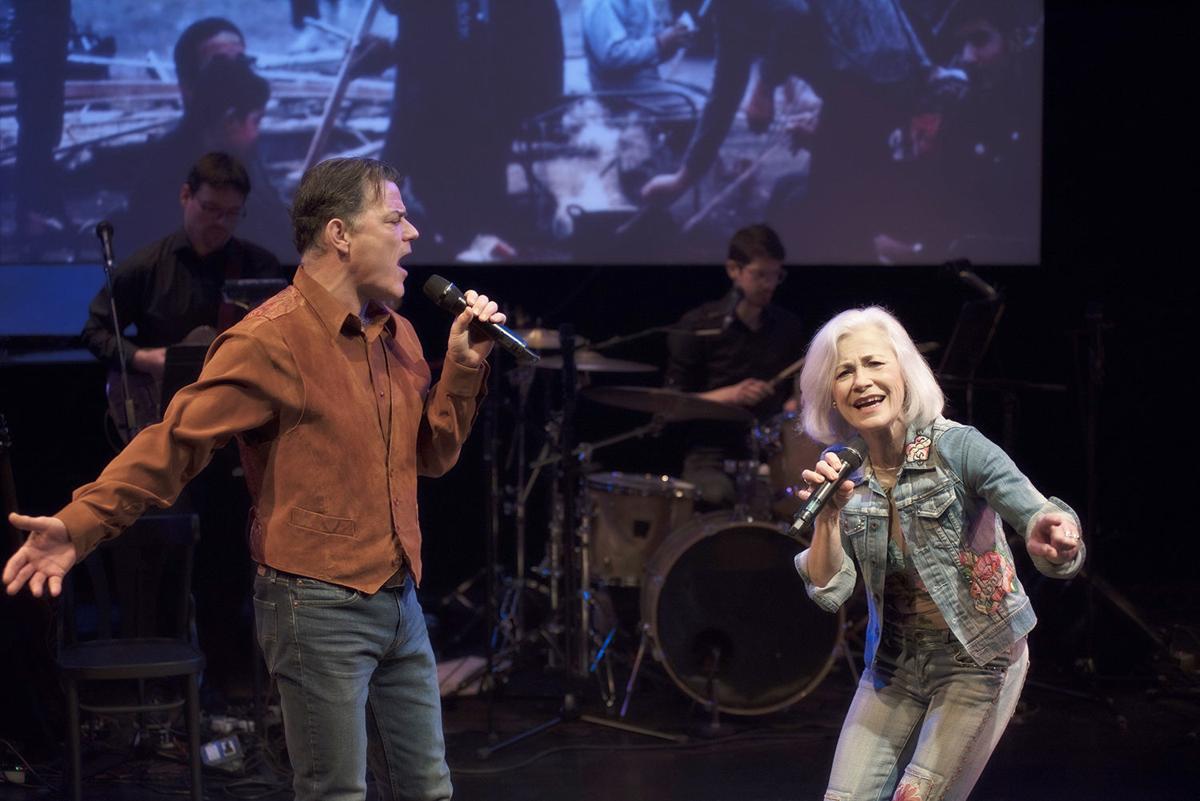 W. Joseph Matheson and Louise Pitre belt out tunes with abundant energy in The Times They Are a Changin’. 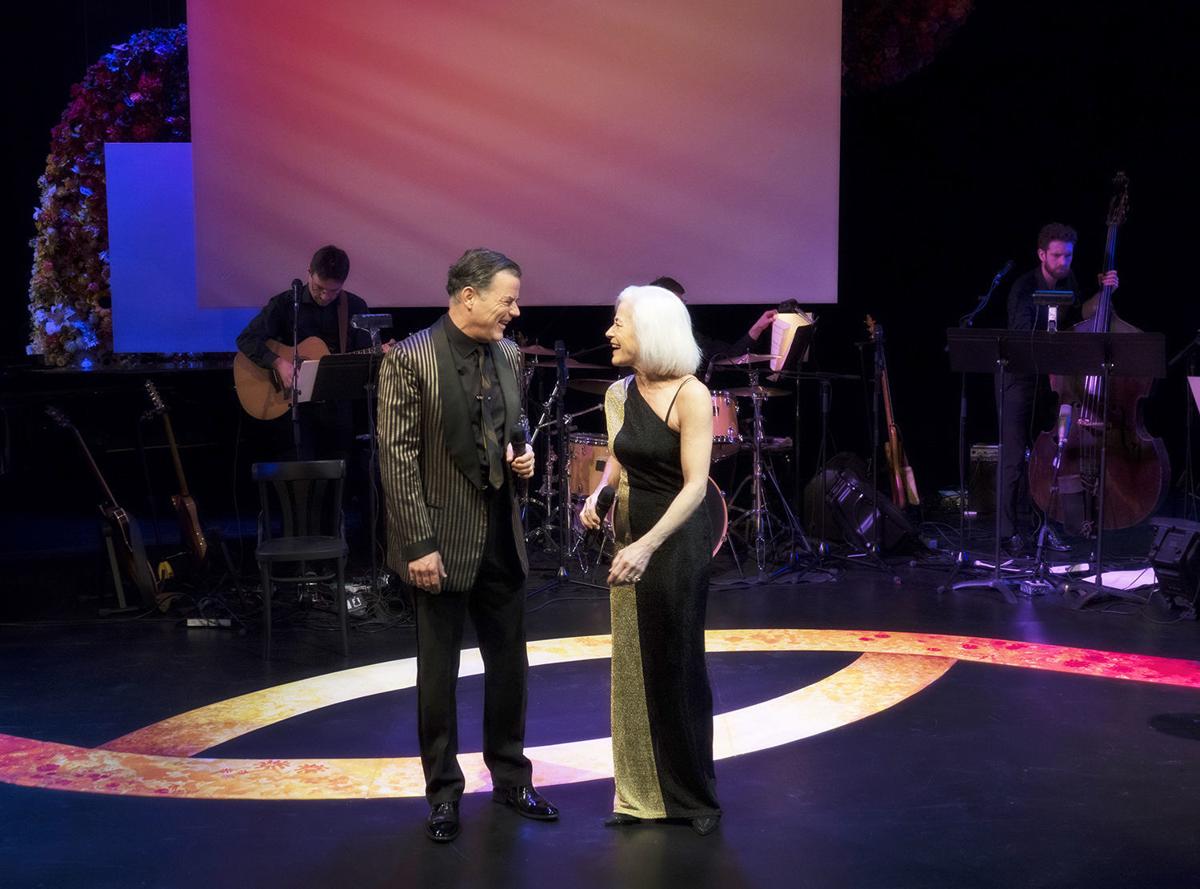 Matheson and Pitre are backed up by a superb band directed by Nick Burgess, accompanied by Simon Legault, Jason Field, Evan Stewart, and Peter Colantonio.

W. Joseph Matheson and Louise Pitre belt out tunes with abundant energy in The Times They Are a Changin’.

Matheson and Pitre are backed up by a superb band directed by Nick Burgess, accompanied by Simon Legault, Jason Field, Evan Stewart, and Peter Colantonio.

Louise Pitre and W. Joseph Matheson are back at the Segal Centre, belting out tunes with abundant energy in The Times They Are a Changin’, a concert revue they created mostly of protest songs written by Jewish musicians during the 1960s. It had its debut in 2017 at The Greenwin Theatre in the Toronto Centre for the Arts.

Dubbed “Canada’s first lady of musical theatre,” Pitre enjoys a career that spans theatre, television and concert stages across North America and Europe, highlighted with a Tony nomination for her Broadway debut in the smash hit Mamma Mia. Matheson, her husband, has acted in many films, and has also performed in numerous productions worldwide. No strangers to the Segal Centre, in April 2018 they appeared together in The Angel and the Sparrow, where Pitre wowed the audience with her portrayal of Edith Piaf.

Protest songs became part of the popular culture in the 1960s, when many Jewish songwriters redirected their pop music focus to relevant, real-time crises. The Vietnam War was a dominant musical theme. Antiwar songs were much in evidence at the Woodstock festival in 1969 and were an integral part of virtually every antiwar protest march and rally. The 1960s gave rise to many alternative culture and social groups like the hippies, the new left, the Black Panthers and many other movements. Jews made up a disproportionally large percentage of those white Americans who participated in the Civil Rights Movement, lining up shoulder to shoulder with African Americans at rallies, sit-ins and marches.

The most famous author of antiwar protest songs in that period was Bob Dylan. He wrote The Times They Are a Changin’ as a deliberate attempt to create an anthem of change for the time. Pitre wants audiences to truly listen to the lyrics because she says the words still resonate today.

The concert runs close to 90 minutes without an intermission. Directed by Avery Saltzman, it includes about 25 songs, sung individually and in unison by Pitre and Matheson. Saltzman keeps the dialogue between the performers to a minimum, allowing them to establish brief comments about each of the numbers being sung. He also effectively uses background videos and photos to give the songs historical references.

I was aware of Matheson’s keen acting ability, but I didn’t realize his splendid capabilities as a folk singer. Of course, he hasn’t got the vast range of Pitre, but then, few really do. The basic repertoire of folk songs — that include If I Had a Hammer, This Land is Your Land, Blowin’ in the Wind and Where Have All the Flowers Gone? — are revived vigorously, but Saltzman has also wisely chosen to have added a mix of popular songs, some by Leonard Cohen and Paul Simon.

Pitre and Matheson are backed up by a superb band directed by Nick Burgess, accompanied by Simon Legault, Jason Field, Evan Stewart, and Peter Colantonio. I often found myself momentarily turning away from the singers, being mesmerised by Burgess on the keyboard.

Opening night March 5 was reminiscent of days when I attended folk music concerts by Pete Seeger, when he performed solo, and later when he teamed up with the Weavers. Although not Jewish, Seeger spent his lifetime promoting folk songs that encouraged social change that were mostly composed by Jewish musicians.

Opening night, I was also aware that the times would shortly really be changing as we would soon be making the switch to daylight saving time. Kudos to the Segal Centre for scheduling this sunshine of a concert near the end of the drab dark days of winter. Gleefully listening to and watching Pitre and Matheson will prepare us for bright warmer better days that lie ahead.

The Times They Are a Changin’ continues until March 22. For more info visit segalcentre.org.