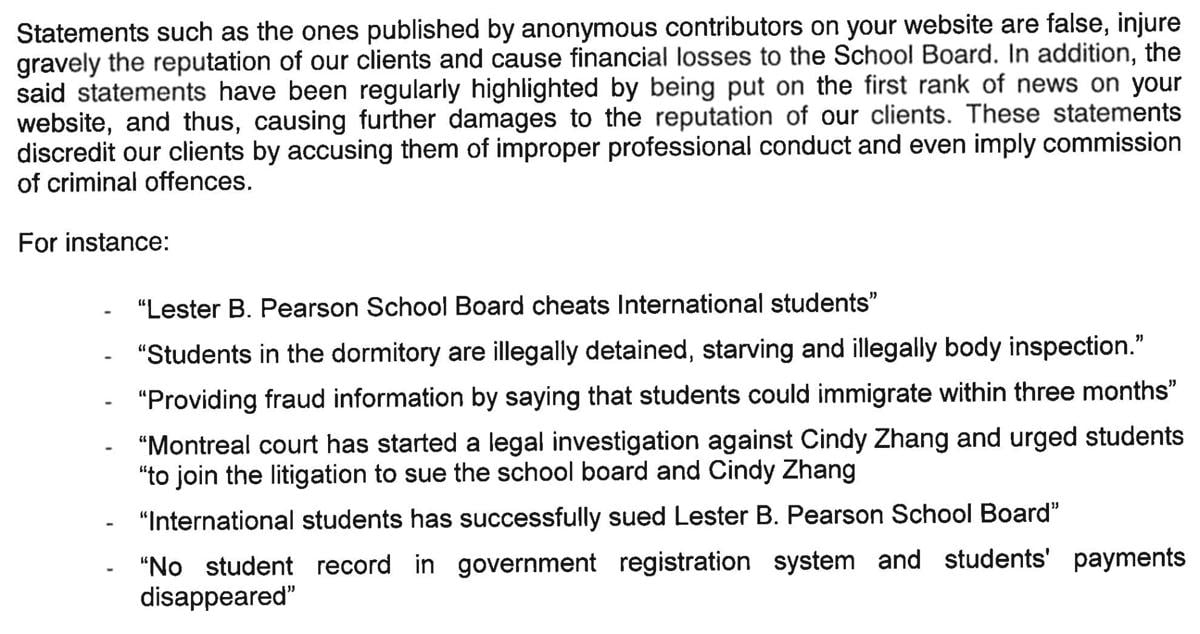 LBPSB lawyers termed the students’ complaints, which they translated from Chinese, “false” and “defamatory”. 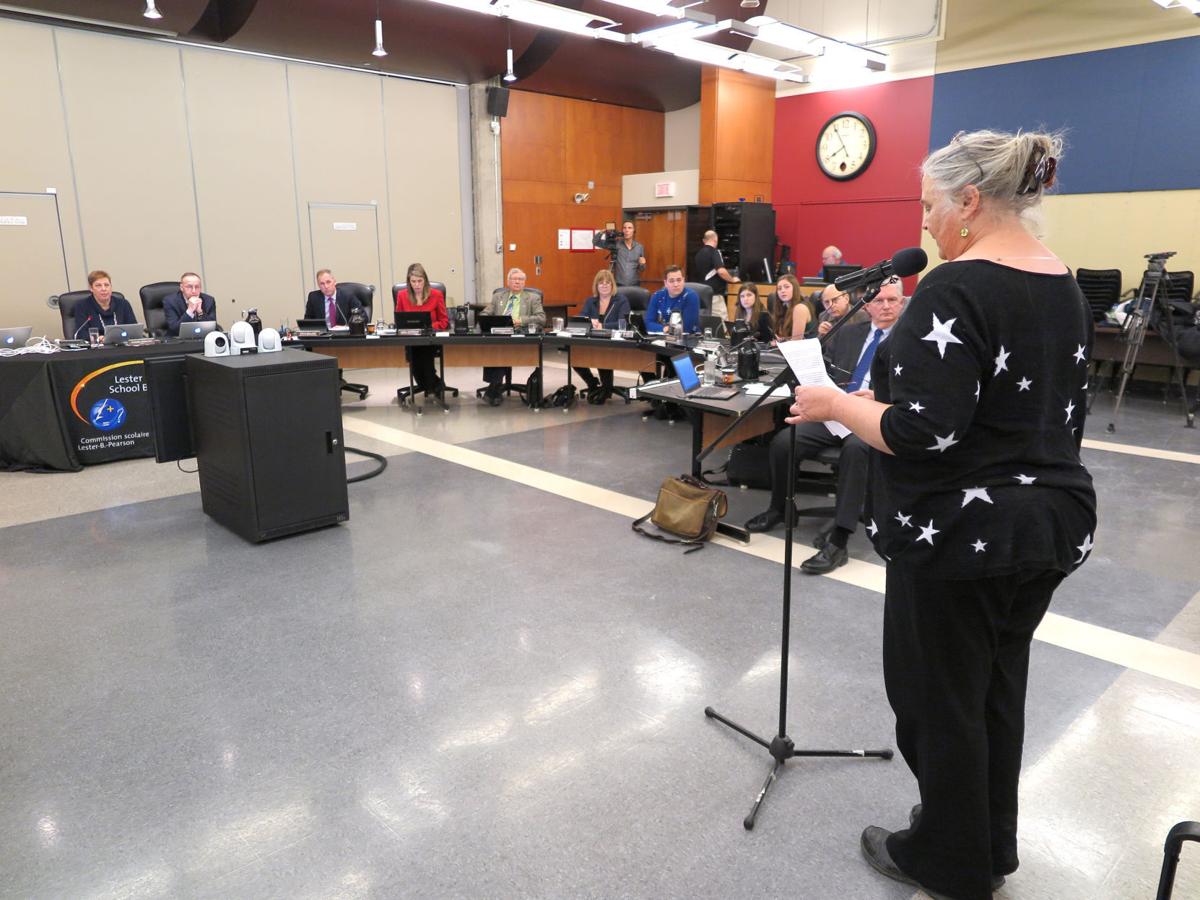 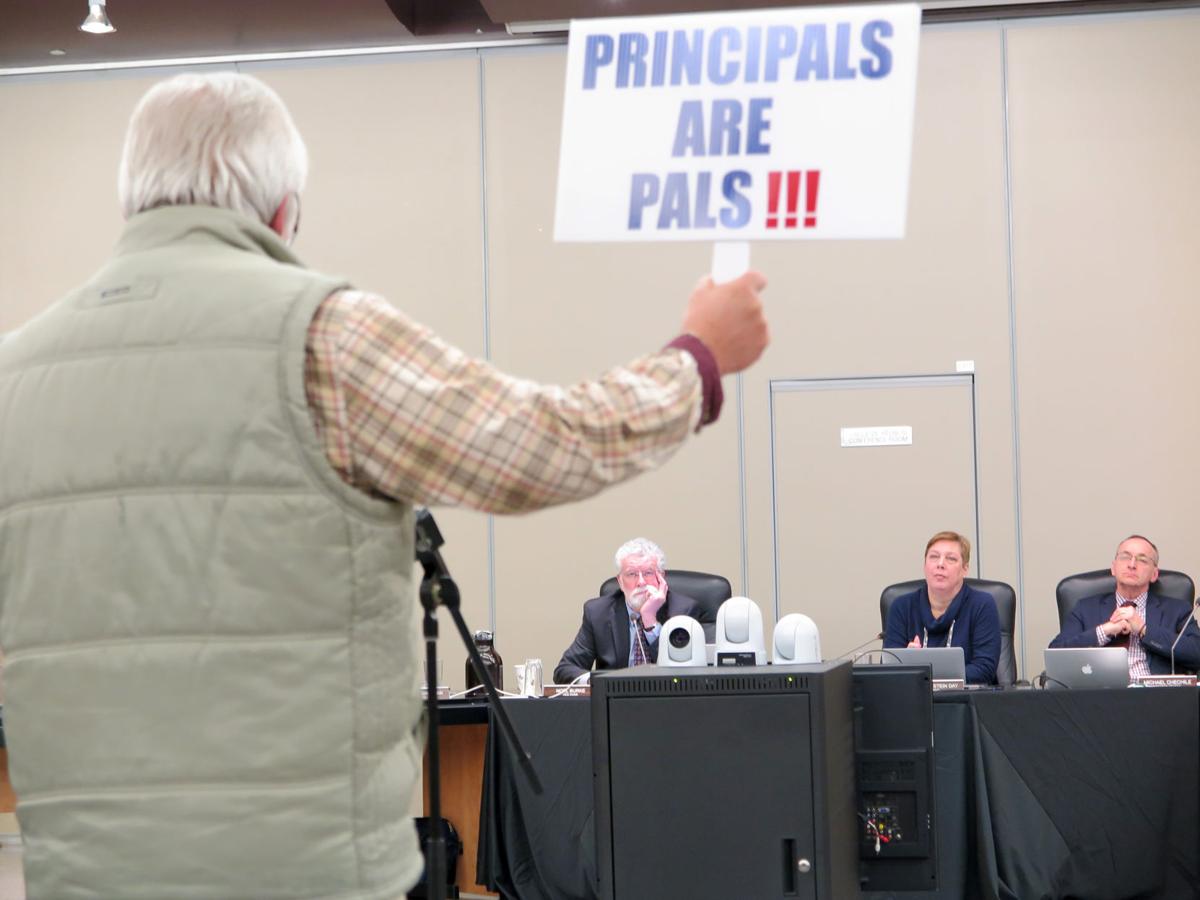 LBPSB lawyers termed the students’ complaints, which they translated from Chinese, “false” and “defamatory”.

After teenage Chinese students studying at Lester B. Pearson School Board (LBPSB) began to post their grievances in Chinese on montrealchina.com, LBPSB attorneys demanded that the web site remove all their comments.

A letter to Qiang Zhang, April 15, 2015, called the Chinese students’ statements “defamatory” and claimed that they were “false, injure gravely the reputation of our clients and cause financial losses to the school board.” In addition to the alleged injury to the school board, the letter also claimed that the students had also defamed LBPSB international liaison officer Cindy Zhang.

The lawyers alleged that montrealchina.com had violated “general civil liability” and suggested that it had also contravened Section 22 of Quebec’s Act to establish a legal framework for information technology.

According to a source who spoke on condition of anonymity out of fear of reprisal against the Chinese students, copies of the lawyers’ letter to montrealchina.com were also sent to parents in China.

The source told The Suburban that some LBPSB international students were housed in windowless basement dormitories; that the youth had complained that some of the food that they were served was past its expiry date; that there was insufficient privacy for young females; and that some students were pressured to remain in LBPSB dormitories after they turned 18, rather than seek accommodation elsewhere. Students also began to receive written demands for payment in December, even though their contract only specified that those payments were not due until Dec. 31.

LBPSB chair Suanne Stein Day confirmed during LBPSB’s Dec. 19 council meeting that it had severed its ties with Naveen Kolan. In 2014, the school board signed a 50:50 agreement with his firm Edu-Edge to recruit and market LBPSB courses to prospective foreign students.

Students also complained last year after they received grades for French on their report cards, even though they had not been offered a French class at any time.

After the complaints brought the alleged lapse to the Quebec Education Ministry’s attention, LBPSB initiated French courses the subsequent year. That French course is far too advanced for first-time speakers who lack even basic French vocabulary, the source suggested.

Stein Day told reporters prior to Monday’s council meeting that she was unaware that the letter had been sent to students’ parents in China.

Spiritual animator Mary Rutherford, who represents LBPSB professional staff union members, stated during the LBPSB council meeting that she had been disappointed to learn while reading The Suburban that she was among the people who had voiced concerns at last month’s about Stein Day’s admission of ethics violations to whom Stein Day subsequently ascribed ulterior motives.