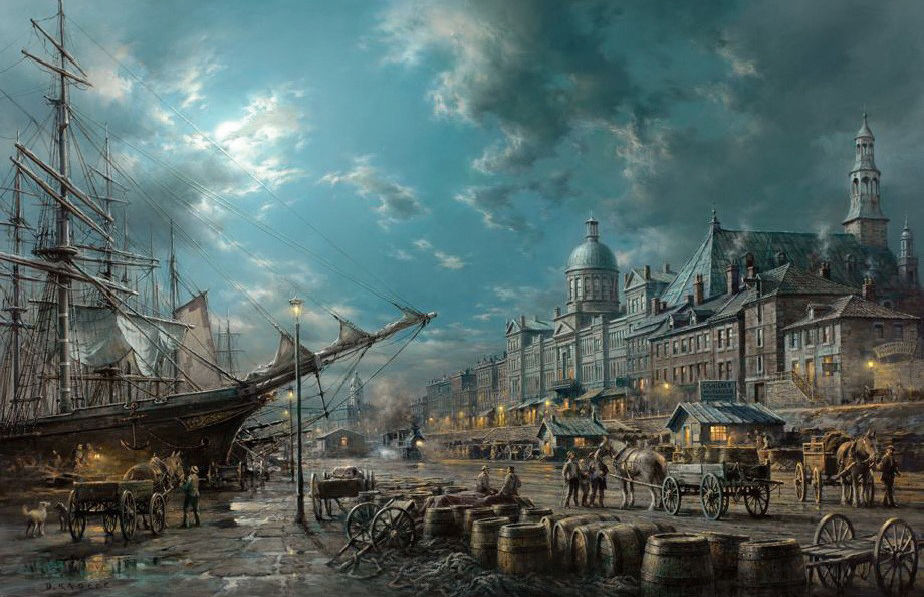 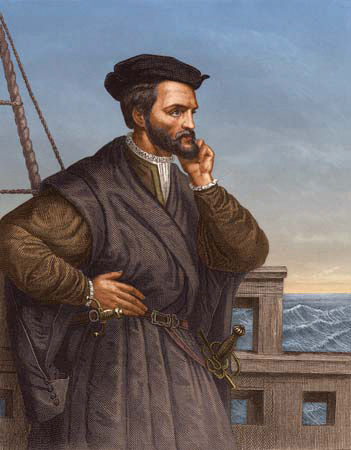 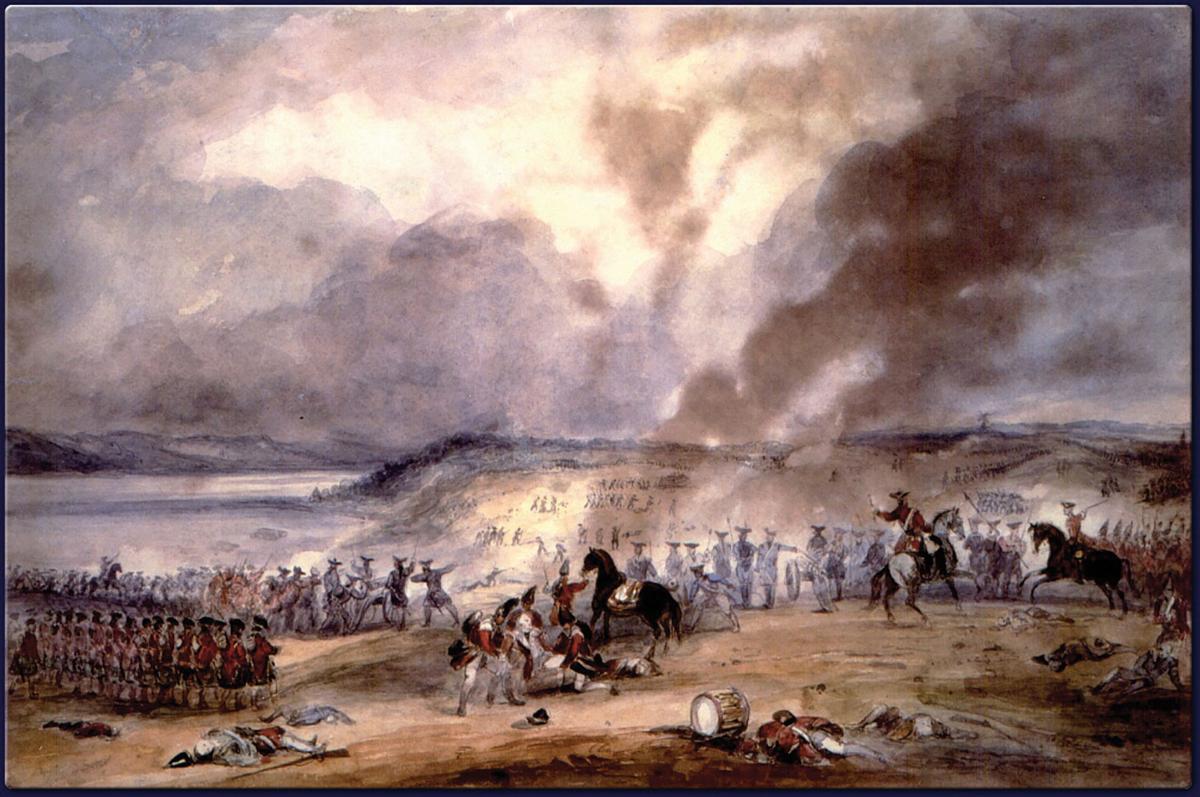 Battle of the Plains of Abraham. 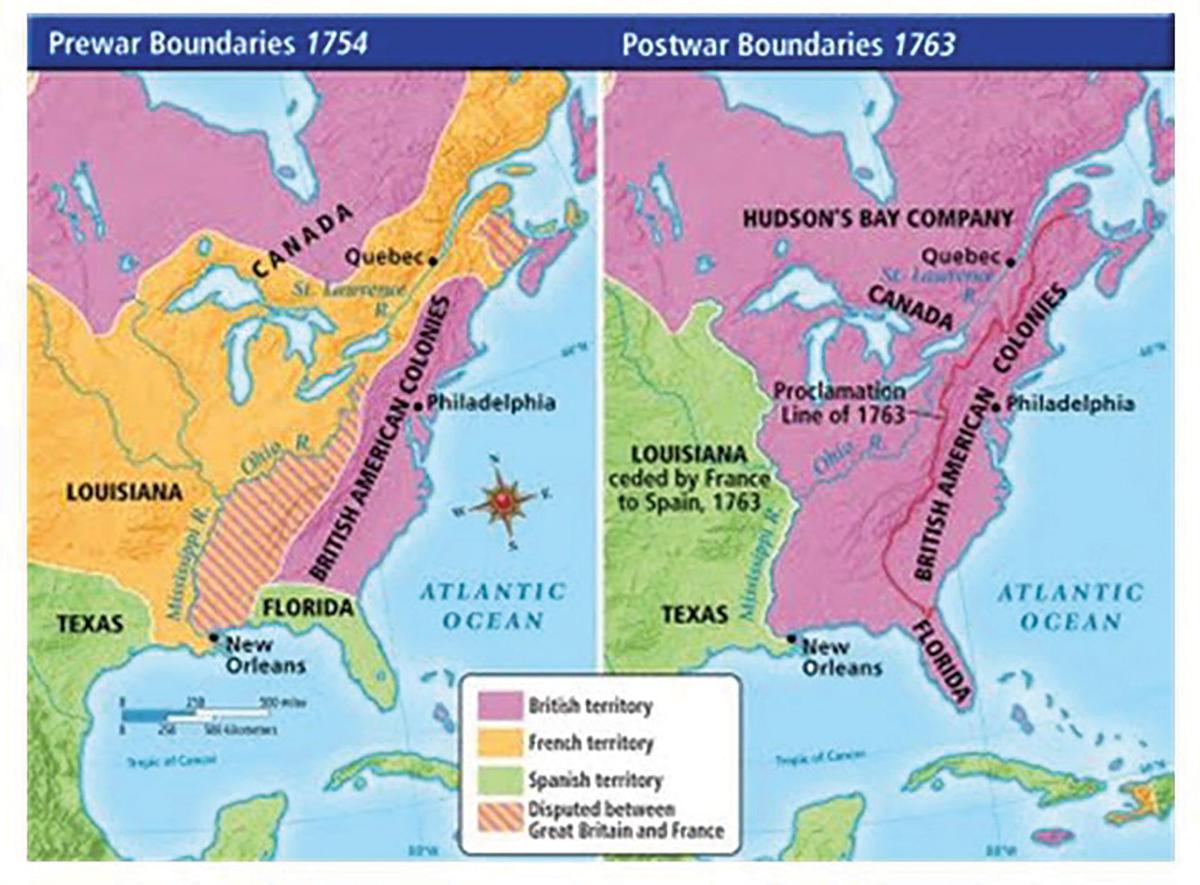 The Treaty of Paris (1763) indicating pre-war and post-war boundaries.

Montreal exists because of the dreams of a 17th century tax collector and a priest.  If  the propaganda from the time is to be believed, the city’s  beginnings were mystical and magical if not downright miraculous. Jérôme Le Royer, sieur de La Dauversière and  Abbé Jean-Jacques Olier, two men who had never met, each had visions of starting a sacred colony on an island in the Americas neither had ever seen.

As the result of a chance encounter in Paris they recognized each other from their respective hallucinations. They then raised enough money to dispatch a Christian soldier, Paul Chomedey de Maisonneuve, and a pious nurse, Jeanne Mance, and a mixed bag of about fifty settlers to build a community in the wilderness.  Those who signed up for the job were members of a clandestine cult known as Les Messieurs et dames pour l’associés pour la conversion des sauvages de nouvelle France en l’Île de Montréal.  They arrived by barge, two flat bottomed boats and a light sailing ship in May 1642.  During the summer they built a fortified settlement  on what is today known as Pointe à Callières.

They called it Ville Marie: They were not the first Europeans to set foot on the island.  Jacques Cartier was the first in 1535. Cartier was welcomed by the residents of an aboriginal village called Hochelaga.  It was Cartier who christened the hill above Hochelaga, Mont Réal.

It took another seven decades before another explorer, Samuel de Champlain, came with Recollect Missionaries and  founded Quebec City  as his  base of operations in New France.  In 1611, as Champlain waged war on the Iroquois, he came to Montreal where the Recollects befriended the Bear Nation of the Huron confederacy.  In 1632, the Jesuits, or the “Black Robes” came to spread the gospel. So by  the  time  La Dauversière and Olier met in Paris in 1639, reports of the exploration of New France would have been an open secret, enough to fuel their ambitions.

In the colony’s first year a flood threatened to wash away the stockade de Maisonneuve had built.  But the waters receded and, grateful to God for sparing them, the pioneers capped the mountain with a cross of thanksgiving.  Jeanne Mance built a hospital, then Marguerite Bourgeouys, a candle maker’s daughter, came to start a school and founded a teaching order of nuns, les filles de la Congrégation de la  Notre Dame.

The syndicate of priests which Olier had founded  in France, The Gentlemen of St. Sulpice, or Les Sulpicians, were given full title to the island and established what one early visitor described as “a clerical police state.”  Their superior, François Dollier de Casson,  a giant of a man, laid out the first streets beyond the stockade.  The first colonists lived in suspense and fear.  Soldiers of the Carignan-Salieres regiment were enlisted to protect the growing town  from frequent Indian attacks, and  Les Filles du Roy, women sponsored by King Louis XIV himself, were sent to become their wives.

In 1660 Adam Dollard des Ormeaux, the 24-year old commander of the garrison  and sixteen of his men were massacred at Long Sault.  Whether Dollard provoked the attack, or was a heroic victim, remains open to interpretation.  The Iroquois, however, sustained heavy losses in the encounter and abandoned whatever plans they might have had to attack Montreal.  Shortly afterwards, the Jesuits built a walled mission at Kahnawake to protect their Mohawk and Algonquin allies from attack.

“These pioneers didn’t only start a colony, they conceived  a  plan to build a great French empire in the  New World,” writes historian Henry Bechand.  “It was Montrealers who ventured as far west as the Rockies and south to the Gulf of Mexico. It was Montrealers who contained the British colonials behind the Allegheny mountains for more than a century.”

Charles le Moyne de Longueuil et de Châteauguay built a fortune from the fur trade and guided his family’s commercial interests.  He sent one of ten sons,  Pierre Sieur d’Iberville, on expeditions to wrest the fur trade from the British;  another, Jean Baptiste Sieur de Bienville, followed LaSalle to Louisiana where he became the governor.

Once Anne Lamarque La Folleville opened Montreal’s first tavern in 1679, Montreal established its identity as a party centre on the St. Lawrence. The Sulpicians tried to shut down the tavern on three  occasions, but their court challenge failed when  it turned out that even some of the clergy drank at Folleville’s.  One visiting French officer, Baron de la Honton, was appalled at the behaviour of the native born Canadiens. “They plunge up to their necks in voluptuousness,” he wrote, “Good living, women, gaming, drink and everything goes.”

By 1701, when the Great Peace was signed with  Kondiaronk, a Huron chief and convert representing the warring tribes, Ville Marie de Montréal  had grown to 1,500. It was a wide-open town which had become a strategic point for the fur trade.  By the  time the king’s engineer, Gaspard-Joseph Chaussegros de Léry began fortifying the town in 1716 it was fast becoming what Abbé François Belmont described as “a little Babylon which has overwhelmed and intoxicated everyone with the wine of its prostitution.” Much of the city burned in April, 1734, and a slave, Marie-Joseph Angélique was convicted of arson and hanged for the crime.

By the 18th century, there were two million colonial Americans along the eastern seaboard bent on expanding their colonies who began to push the indigenous people westward. On May 28, 1754, in what is present day Pennsylvania, George Washington, then a 22-year old major in the Virginia militia, invaded French territory and ambushed a French patrol under the command of Joseph Conlon de Villieres de Jumonville.  De Jumonville was captured in the attack and savagely murdered. In retaliation, Louis XV sent royal troops to reinforce his North American army and the domino effect  led  to a seven year struggle between the French and the British for the control of  North America.

In spite of what we may have been taught in school, the Battle of the Plains of Abraham settled nothing. The final battle of the war for New France was, in fact  fought at Neuville  the following spring on May 17, 1760 when the British finally smashed the French supply lines.  The British outnumbered the French on the continent two to one. Weary of seven years of warfare,  the  Sulpicians in Montreal  helped to negotiate the seamless transfer of the island  and of all of New France to the British later that year.  To avoid further bloodshed the   Marquis de  Vaudreuil  dictated his  55 articles of capitulation to the British which General  Amherst accepted. In    handing over the city, Vaudreuil refused  to  break his sword  in the traditional admission of defeat and in one last defiant gesture had his regiments’  colours  burned rather than hand them over to the British.

The fate of the city, which  capitulated but never surrendered, hung in the balance for three more years.  The Sulpicians remained the temporal authority, French continued  to  be  used as the language of commerce  and French civil law was retained.  Finally, with the Treaty of Paris, the Seven Years War came to an end. The French were exhausted militarily and financially in Europe and in North America. The histories  of the Treaty negotiations demonstrate that the British were open to allowing the French to take back Montréal. Again, contrary to what is popularly taught today, it was the French who concluded that they did not have the resources to maintain all their possessions and colonies and chose to abandon Montréal - indeed all of New France except for St.Pierre and Miquelon - but keep Guadeloupe and its lucrative spice trade.

With the Treaty of Paris in 1763 Quebec became the 14th British  American  colony.