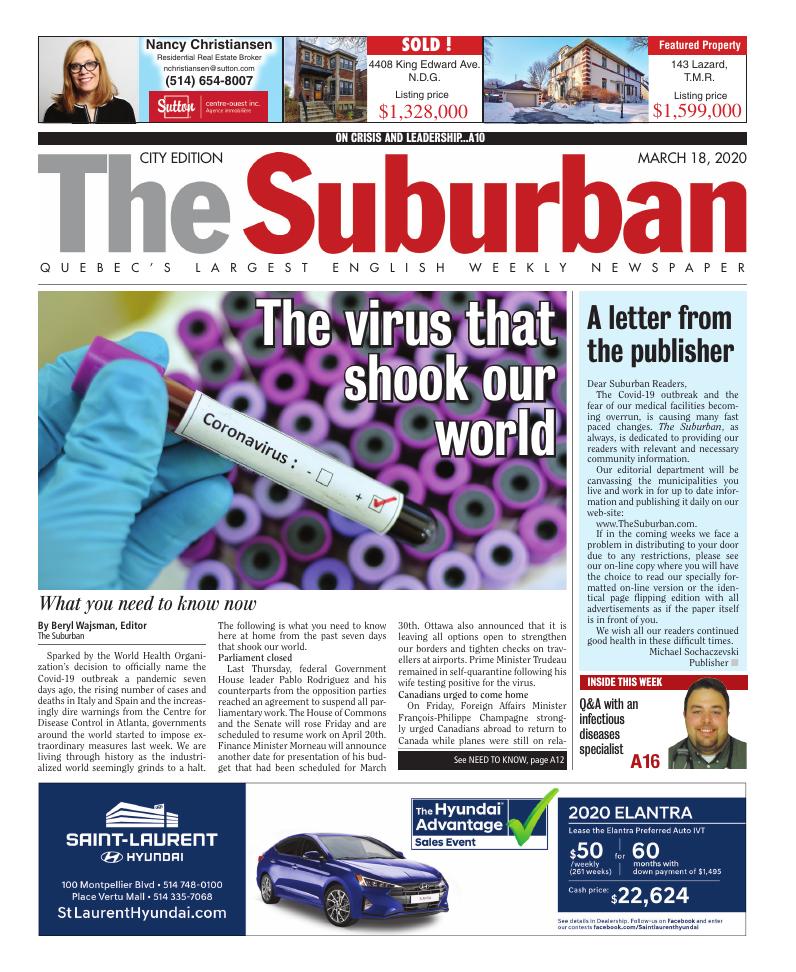 Covid_19
featured
The virus that shook our world
Beryl Wajsman  / By Beryl Wajsman, Editor The Suburban
03.18.20

Sparked by the World Health Organization’s decision to officially name the Covid-19 outbreak a pandemic seven days ago, the rising number of cases and deaths in Italy and Spain and the increasingly dire warnings from the Centre for Disease Control in Atlanta, governments around the world started to impose extraordinary measures last week. We are living through history as the industrialized world seemingly grinds to a halt. The following is what you need to know here at home from the past seven days that shook our world.

Last Thursday, federal Government House leader Pablo Rodriguez and his counterparts from the opposition parties reached an agreement to suspend all parliamentary work. The House of Commons and the Senate will rose Friday and are scheduled to resume work on April 20th. Finance Minister Morneau will announce another date for presentation of his budget that had been scheduled for March 30th. Ottawa also announced that it is leaving all options open to strengthen our borders and tighten checks on travellers at airports. Prime Minister Trudeau remained in self-quarantine following his wife testing positive for the virus.

On Friday, Foreign Affairs Minister François-Philippe Champagne strongly urged Canadians abroad to return to Canada while planes were still on relatively regular flight schedules. Restrictions and cutbacks of airlines continued around the world.

Airlines cancelled flights. New restrictions were imposed with little advance notice. Ottawa recommended that Canadians should avoid all international travel and said it would limit where inbound flights to Canada would be allowed to land.

With spring break in full swing, Employment Minister Carla Qualtrough, who sits on the COVID-19 cabinet committee, told CBC on Saturday that she was conscious of criticisms that the federal government delayed telling Canadians to avoid non-essential international travel. “I totally can relate as a mother of two children now just starting their own spring break,” she said. This past Monday the Prime Minister announced the closing of Canada’s borders to all but citizens and permanent residents. Certain exceptions will,be made for family members and US citizens. Transport Canada will produce a list of designated airports for international travellers and returning Canadians to be processed and screened.

On Sunday, Premier Legault ordered the closing of all bars, movie theatres, pools and ski resorts. He said this is an effort to restrict places, “where people gather.” He also asked restaurants to cut their capacity to 50% in order to allow patrons to keep a distance from each other. This came in the wake of France’s similar decision and of the largest one-day increase in Quebec’s Covid cases. As of Sunday, there were 35 Covid-19 cases in the province. An increase of 11. This was not unexpected as more testing rolls out. Authorities await results on 1186 people who have been tested. Test results on 1890 others have come back negative. The Premier said these measures were necessary to, “limit contagion in the first days.”

On Sunday and Monday, Quebec asked school boards across the province to open daycare services in specified schools that are close to hospitals, CIUSSS’ and other medical facilities. These school daycares will provide childcare for the school-aged children of professionals who work in the health care, law enforcement and public security sectors over the next two weeks while schools are closed. The schools were chosen by the government. The EMSB schools are: St-Gabriel, Bancroft, Pierre Elliott Trudeau, Dante, Westmount Pak – St-John Bosco south campus, St-Monica, Elizabeth Ballantyne and Cedarcrest. Over the course of the next couple of days, information will be issued about how many children will be enrolled in these eight daycares. Thereafter, a schedule will be made for the remainder of the two weeks.

As we went to press Quebec announced that the tax filing deadline is extended from April 30 to June 1 editor@thesuburban.com

The Covid-19 outbreak and the fear of our medical facilities becoming overrun, is causing many fast paced changes. The Suburban, as always, is dedicated to providing our readers with relevant and necessary community information.

Our editorial department will be canvassing the municipalities you live and work in for up to date information and publishing it daily on our web-site: www.TheSuburban.com.

For the coming weeks our normal door to door service will be interupted. Please see our on-line copy where you will have the choice to read our specially formatted on-line version or the identical page flipping edition with all advertisements as if the paper itself is in front of you.

On our website you will find not only the Laval edition but also our West Island and City editions.

We wish all our readers continued good health in these difficult times. 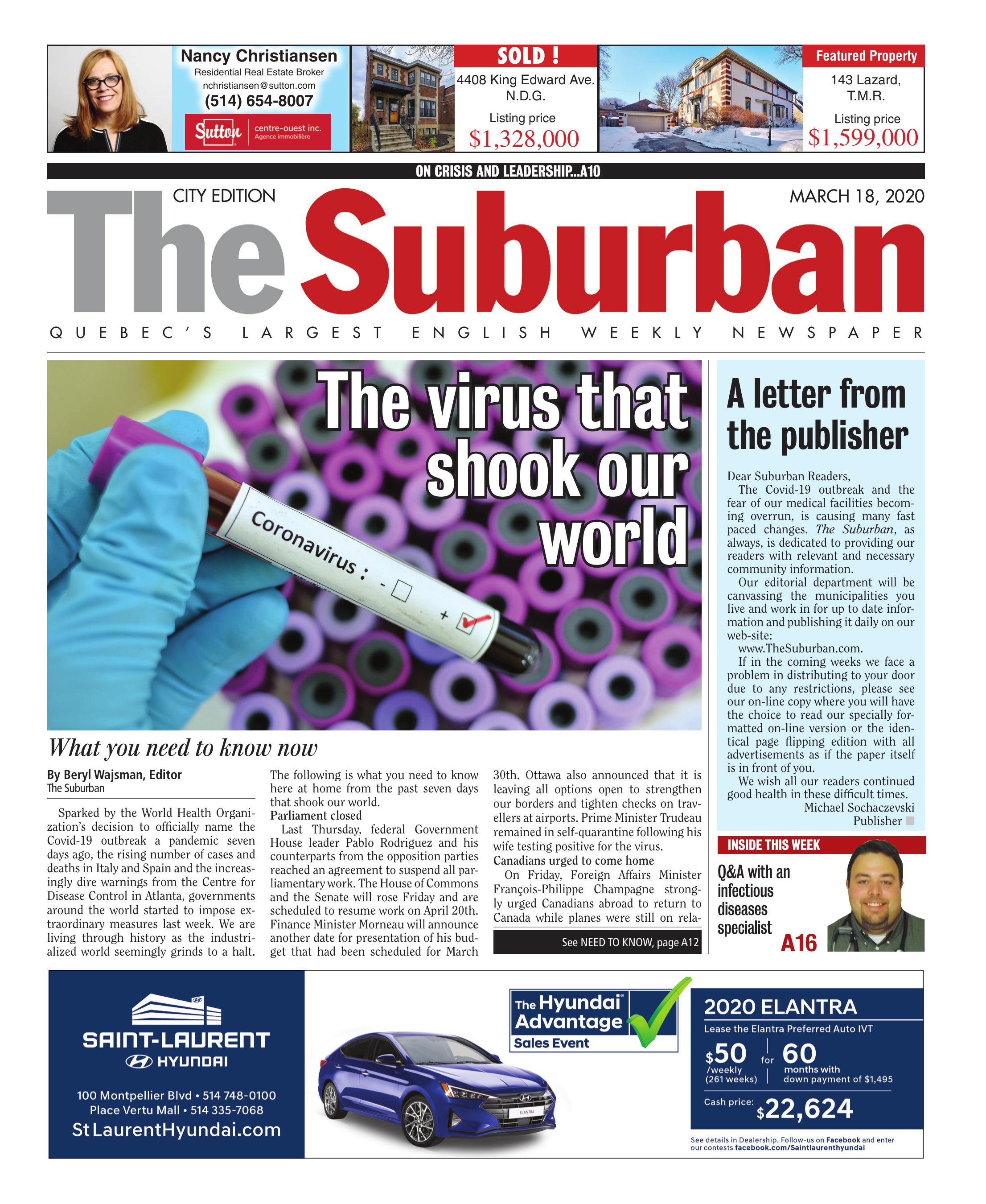