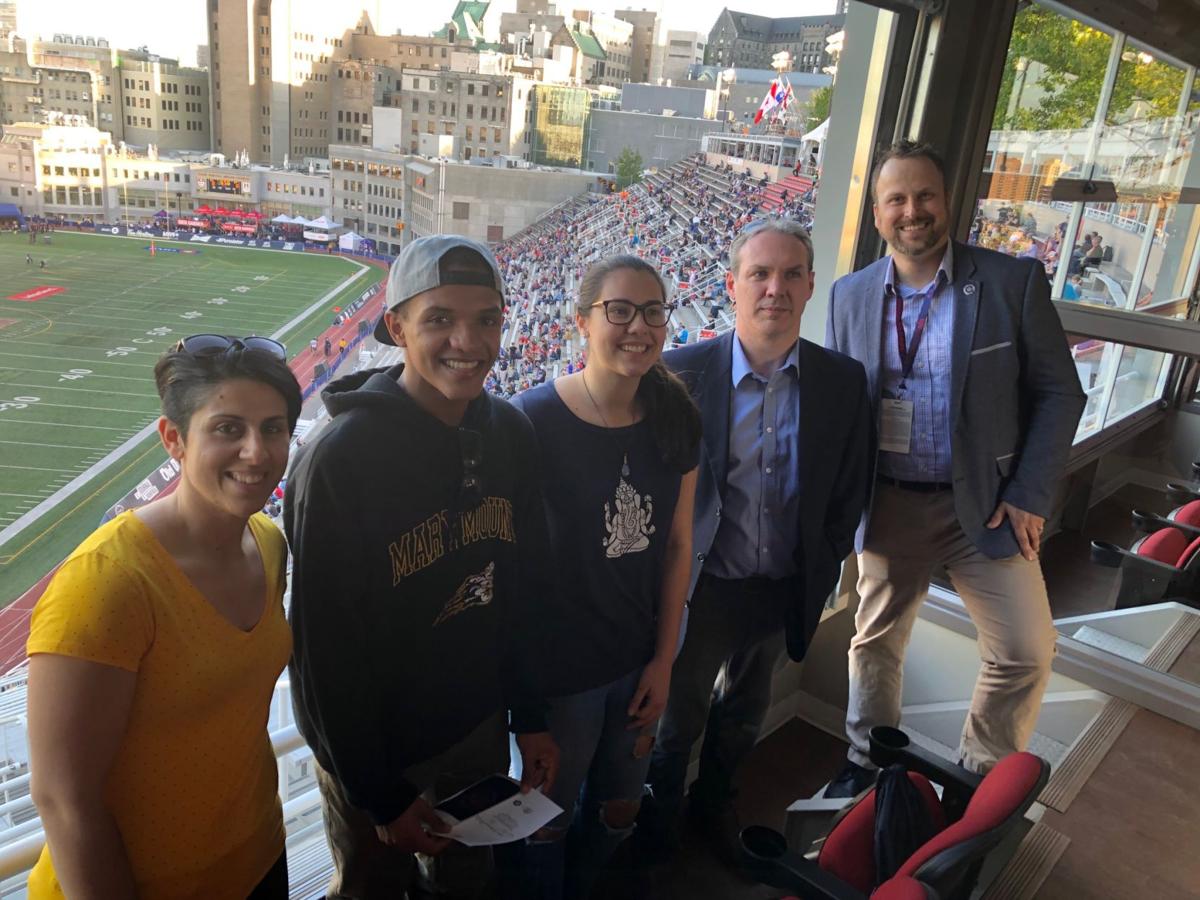 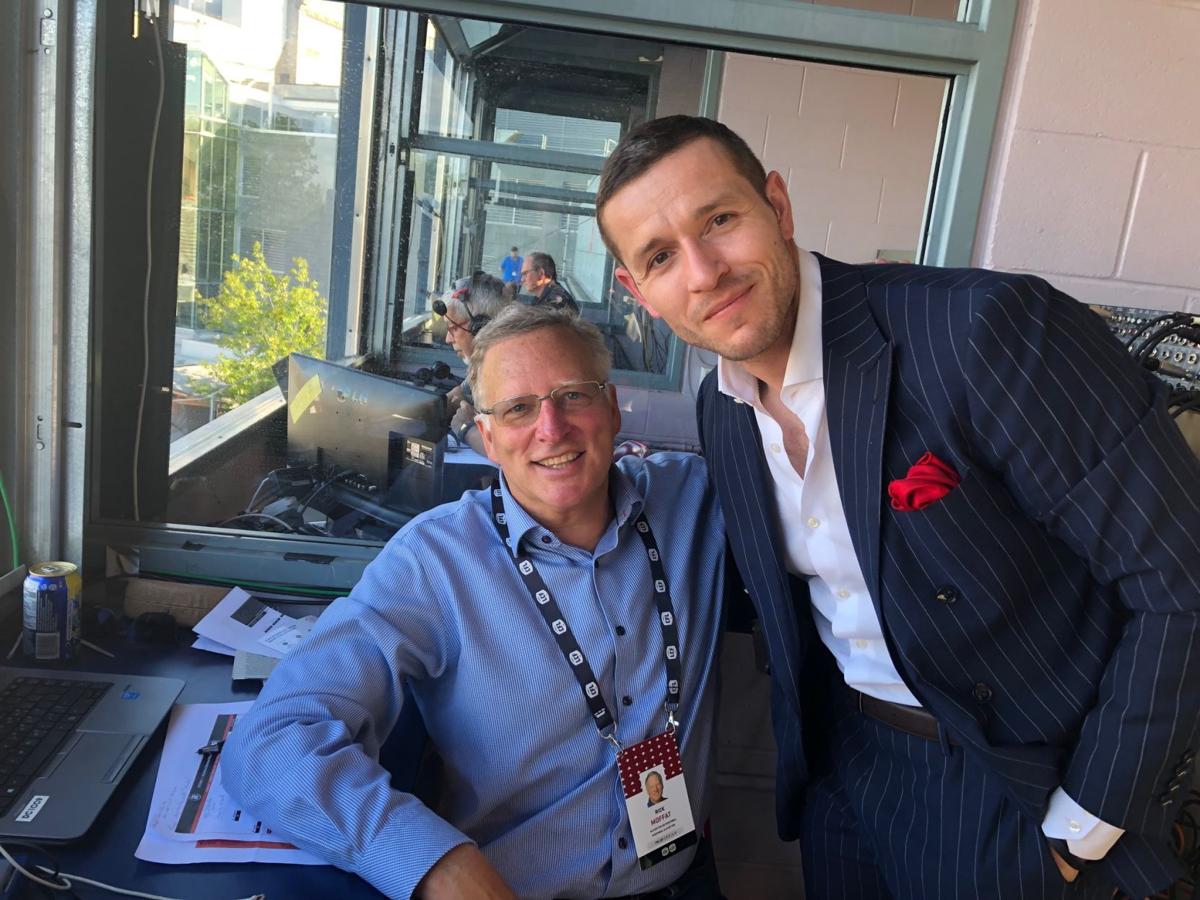 On Grand Prix Weekend, a pre-season game at McGill’s Percival Molson Stadium between the host Montreal Alouettes and the Ottawa Redblacks drew an enthusiastic crowd of 13,474. It was a picture perfect Thursday evening at a classic outdoor facility overlooking the city skyline. The game meant nothing and it ended in a 20-20 tie, but there was indeed optimism in the air. At a time when the local franchise has no owner, but a few mysterious suitors, I believe Als fever is about to spike!

Anyone who came to this game will want to come back! At my day job with the English Montreal School Board, I worked with my colleague Daniel and we sold over 500 tickets for the game. We worked with Director of Ticket Sales and Fan Services Brian Weightman, who is a dream partner. He sat down with us in the dead of winter, as he does every yea,r to find a way to get students into the stadium. I worked my way through the crowd and spoke to many from the EMSB family on hand and they were all very happy with the game experience. A number of school principals  on hand immediately  booked games for the fall to bring their own students.

Off the field the Als always get it right in terms of community relations, mastering the school visit exercise. It is something I believe the soccer Impact will finally get right once new president Kevin Gilmore gets a handle on his new surrounding. But it all starts with people like Weightman and his colleague Corey Ramirez who are prepared to work any group to sell tickets and promote interest in the team.

I am a huge fan of General Manager Kavis Reed. Yes I want to see the Als succeed on the field for many reasons, but particularly to show that Reed is indeed the right man for the job. In all of the years I covered the Als for my column, I never once got to meet then GM Jim Popp. He was the invisible man in the community in terms of any public appearances. Reed gave me his private cell number and said to call anytime. As a result he was a fixture at our school events this past off season.

“I truly believe we have a good team and the process of rebuilding will show fruit barring injuries,” Reed told me. “I want so much to win and to make some people realize that sports should be one of the most unbiased institutions in life. I always say it is the greatest equalizer….without prejudice or bias. I am truly committed to giving the fans an established winning team.”

This brings me to the team ownership situation. Football fans must be very grateful to Robert Wettenhall and his son Andrew for rescuing the team 22 years ago and carrying them financially for over two decades. The time has come for local Québecois owners and CFL Commissioner Randy Ambrosie is conducting his due diligence to make sure the right person(s) is found. I hope that happens soon and the new group gives Reed, President Patrick Boivin and their organization time to show they are on the right track. Names being mentioned lately are Luxury Retreats CEO Joe Poulin and former Google executive Patick Piché. It seems that ex-Alouette Eric Lapointe is in the picture as well.

I must tell you how much I enjoyed my evening at the game. Before the kickoff I went to say hello to TSN 690 play by play man Rick Moffat, who is such a pleasure to listen to. He introduced me to his new colour commentator Marc-Olivier Brouillette. “He will be the rookie of the year,” ‘Moffat predicted.

Brouillette is a former Als linebacker who now works as a lawyer for the firm of Robinson Sheppard and Shapiro. The Dollard des Ormeaux native played nine seasons in the CFL, the first eight with the Als before finishing off with Saskatchewan.

On the field I am confident Reed has made some good moves. With Antonio Pipkin at quarterback and Vernon Adams Jr. as his backup I think the offense is in good hands. Look for running back William Stanback to shine and ditto for newly arrived wide receiver Devier Posey.

Weightman shared with me the fact that the Als will not sell more than 20, 025 tickets for any one game this season. Sections will be closed off. If they play well, they might have to turn fans away.

Let’s hope that the 2019 season will be a good one for the Als and that new ownership only serves to invigorate a brand that I do believe is already in reliable hands administratively.