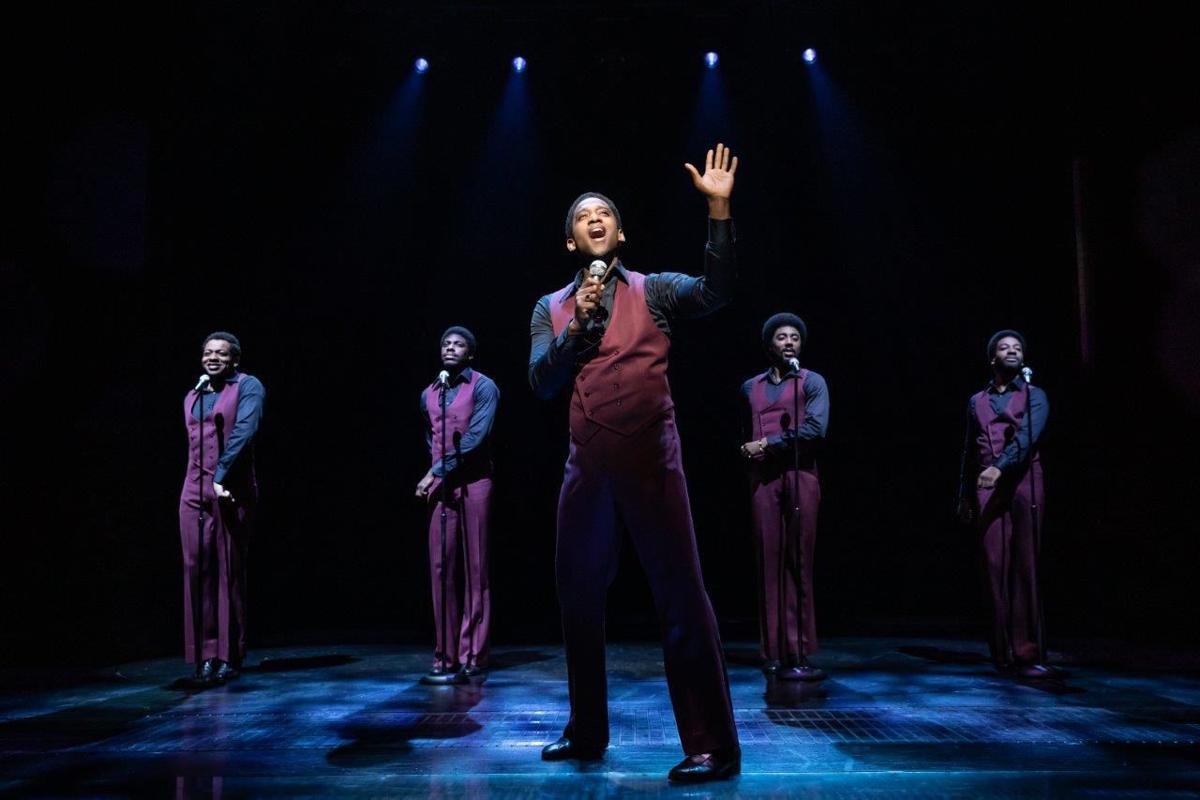 Derrick Baskin is outstanding in the lead role. 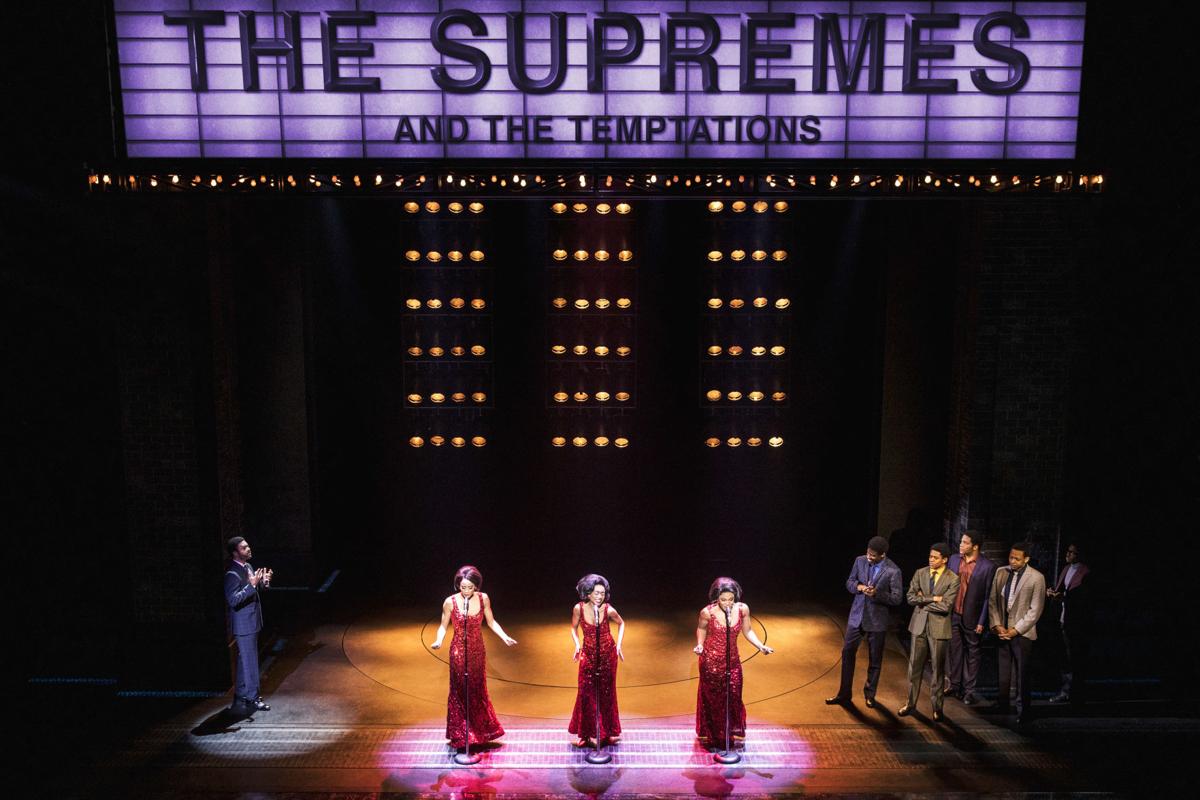 The Supremes are part of the show as well. 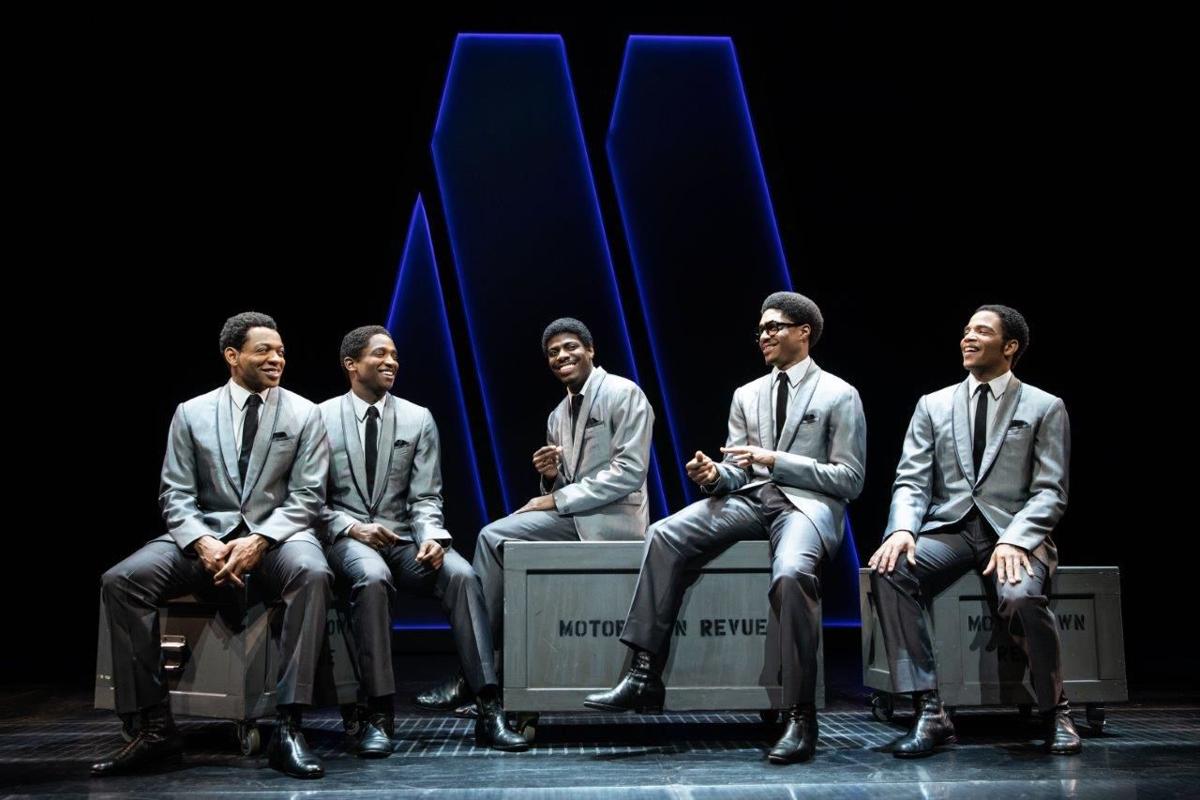 A scene from Ain't Too Proud

Last spring I saw Motown the Musical in Montreal, the American dream story of Motown founder Berry Gordy’s journey from featherweight boxer to the heavyweight music mogul who launched the careers of Diana Ross, Michael Jackson, Smokey Robinson and many more. I loved every minute of it. So when I visited New York City recently, I was naturally drawn to Ain’t Too Proud: The Life and Times of the Temptations. It won a 2019 Tony Award for Best Choreography and had 12 nominations.

The Temptations are an American vocal group who released a series of successful singles and albums with Motown during the 1960s and 70s. Featuring five male vocalists and dancers, the group formed in 1960 in Detroit, Michigan under the name The Elgins and gave us such memorable hits as My Girl, Ain't Too Proud to Beg, I Wish It Would Rain, Treat Her Like a Lady, Just My Imagination (Running Away with Me) and For Once In My Life, What Becomes of the Broken Hearted and more. They earned three Grammy Awards.

Ain’t Too Proud, currently playing at the Imperial Theatre on West 45th Street until at least US Thanksgiving Weekend 2020, is the electrifying new musical that follows The Temptations' extraordinary journey from the streets of Detroit to the Rock & Roll Hall of Fame. With their signature dance moves and unmistakable harmonies, they rose to the top of the charts creating an amazing 42 Top 10 hits with 14 reaching number one. The rest is history — how they met, the groundbreaking heights they hit and how personal and political conflicts threatened to tear the group apart as the United States fell into civil unrest. This thrilling story of brotherhood, family, loyalty and betrayal is a beautiful production.

Tony Award nominee Derrick Baskin portrays Otis Williams and is the glue to the show. He narrates the entire history of the Temptations from the opening number until the conclusion. Before walking into the theatre I simply knew the songs which made the Temptations so successful, but this is a true history lesson and it pulls no punches. There have been 24 members of the Temptations since this group was first established. Williams had to continually make the hard decisions and drop members who were not comporting themselves properly. At one point two of the singers who were let go returned for a reunion tour, but they could not turn over a new leaf. Williams himself was an absentee father and husband, focused exclusively on the business. I loved the show so much that the greatest hits of The Temptations are now loaded on my iPhone.

Tickets for Ain’t Too Proud are available by visiting www.Telecharge.com, by calling 800-447-7400, or by visiting the Imperial Theatre Box Office (249 West 45th Street). For groups of 10 or more, visit www.BroadwayInbound.com or call 866-302-0995. For more information, visit www.AintTooProudMusical.com. The show runs two and a half hours.

We like to walk toBroadway shows and our one and only choice for accommodations remains the historic Algonquin Hotel. Located on 44th Street near, 6th Avenue, it is a mere block and a half from Times Square.

There is another reason why I love this hotel. When we travel we board our cat and miss her every second. The Algonquin is home to Hamlet VIII, a three and a half year-old orange cat. According to hotel executive assistant Alice De Almeida, he was originally a feral cat found in Long Island and brought to the Bide-a-wee shelter (the oldest shelter in the Big Apple), where the Algonquin then adopted him as their own. He came to the hotel in July 2017 after their former cat, Matilda III, retired. “He is so friendly and loveable that people who never liked cats love him.” Alice says proudly. “He has great purrsonality!”

Hamlet has his own Twitter and Instagram accounts, as well as an email account. “I take care of all his needs, front and back, vet visits and more,” says Alice.

Alice has three cats of her own at home and feeds several ferals in her area. She came to work at this hotel in 2005 and quickly became the natural guardian of the resident cats. “I have become a real Jewish mother to our cats,” she laughs.

Based on the timeline of a book written by the hotel’s first general manager, the lineage of The Algonquin Cat dates back to the early 1920s. Two days after this first cat, Billy, passed, another stray cat wandered into the hotel and The Algonquin welcomed Rusty. The famous classical actor, John Barrymore, best known for playing Hamlet on stage, was a resident at the time in the early 1930s, and Rusty was renamed Hamlet in his honor. The lineage thus far now includes eight Hamlets and three Matildas. Each cat that has reigned at The Algonquin has been a rescue.

The hotel’s executive chef cooks Hamlet special meals on holidays. He receives fan mail and gifts constantly from around the world. He has recently been the subject of a painting that hangs above the Front Desk, by New York artist Marcus Pierno. Hamlet can often be found at the front desk, in one of his two tree houses or prancing through the lobby. He has been trained to never go outside and is wonderful with everyone who wants to pet him.

Every August The Algonquin hosts an annual Cat Fashion Show to raise money for the Mayor's Alliance for NYC's Animals. The event brings together the city’s most fashionable felines to strut their stuff in one-of-a-kind outfits that coincide with different themes – the 2019 edition was “It’s a Small World.” Hamlet VIII was naturally the star. The spectacle begins with cocktails, hors d’oeuvres and desserts; a silent auction featuring a variety of kitty-centric items; an on-site mobile adoption unit in front of the hotel that day and of course NYC cats hitting the catwalk in opulent threads designed by legendary pet fashion designer Ada Nieves. Human guests are encouraged to wear their most eccentric, feline-inspired outfit and share photos from the un-fur-gettable night on social media using the hashtag #AlgonquinCat.

A total of 100 percent of proceeds benefits the Mayor's Alliance for NYC's Animals, a non-profit charity that works with more than 150 partner rescue groups and shelters to offer important programs and services that save the lives of NYC's homeless animals. A raffle raises additional funds throughout the evening, with prizes including a variety of pet products curated by the event’s co-chair, pet lifestyle expert and author Sandy Robins.

The Algonquin first opened its doors in 1902. Today, it is part of the Marriott chain’s Autograph Collection, an evolving ensemble of strikingly independent hotels. Each destination has been selected for its quality, bold originality, rich character, and uncommon details. The result is an array of properties that is nothing less than unique. The Algonquin Hotel was the first New York City property to become a part of the collection.

For well more than 100 years, the Algonquin has been greeting and lodging the country's most prominent writers and literary personalities, as well as the leading figures of the American stage. The hotel is best known, perhaps, for the members of the Round Table, a group of luminaries who had in common both the ability to fire blazing witticisms and to withstand being on the receiving end of them.

After World War I, Vanity Fair writers and Algonquin regulars Dorothy Parker, Robert Benchley and Robert E. Sherwood began lunching at the Algonquin. Though society columns referred to them as the Algonquin Round Table, they called themselves the Vicious Circle. "By force of character," observed drama critic Brooks Atkinson, "they changed the nature of American comedy and established the tastes of a new period in the arts and theatre."

This year marks the centennial of the Round Table and as a result special programming took place all summer long. We were there to take in some of the festivities

Each of the 181 rooms and 25 suites features a comfortable well-lit work desk, as well as complimentary Wi-Fi. We stayed in a very comfortable one bedroom Playbill Suite. The layout was ideally suited for us. There is a nice sized entrance, with the master bedroom to the left featuring a nice-sized bathroom. The spacious living room has a pullout couch, a large desk which was perfect for me to write my stories and good drawer and cupboard space. You can get a fridge and a microwave, depending upon availability and on request.

When you enter the hotel, you come face to face with the casual Lobby Lounge, along with The Round Table Restaurant. Just to the left is the hotel’s trendy and aptly named Blue Bar.