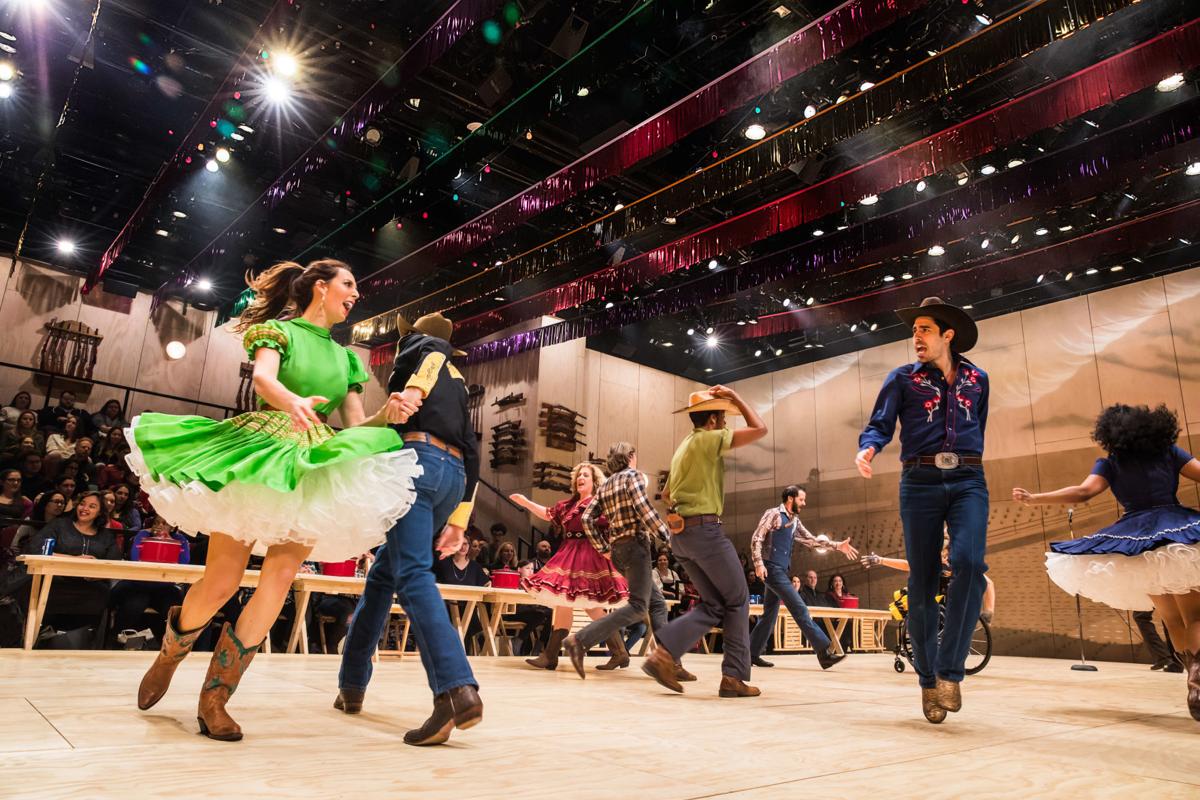 A scene from Oklahoma. 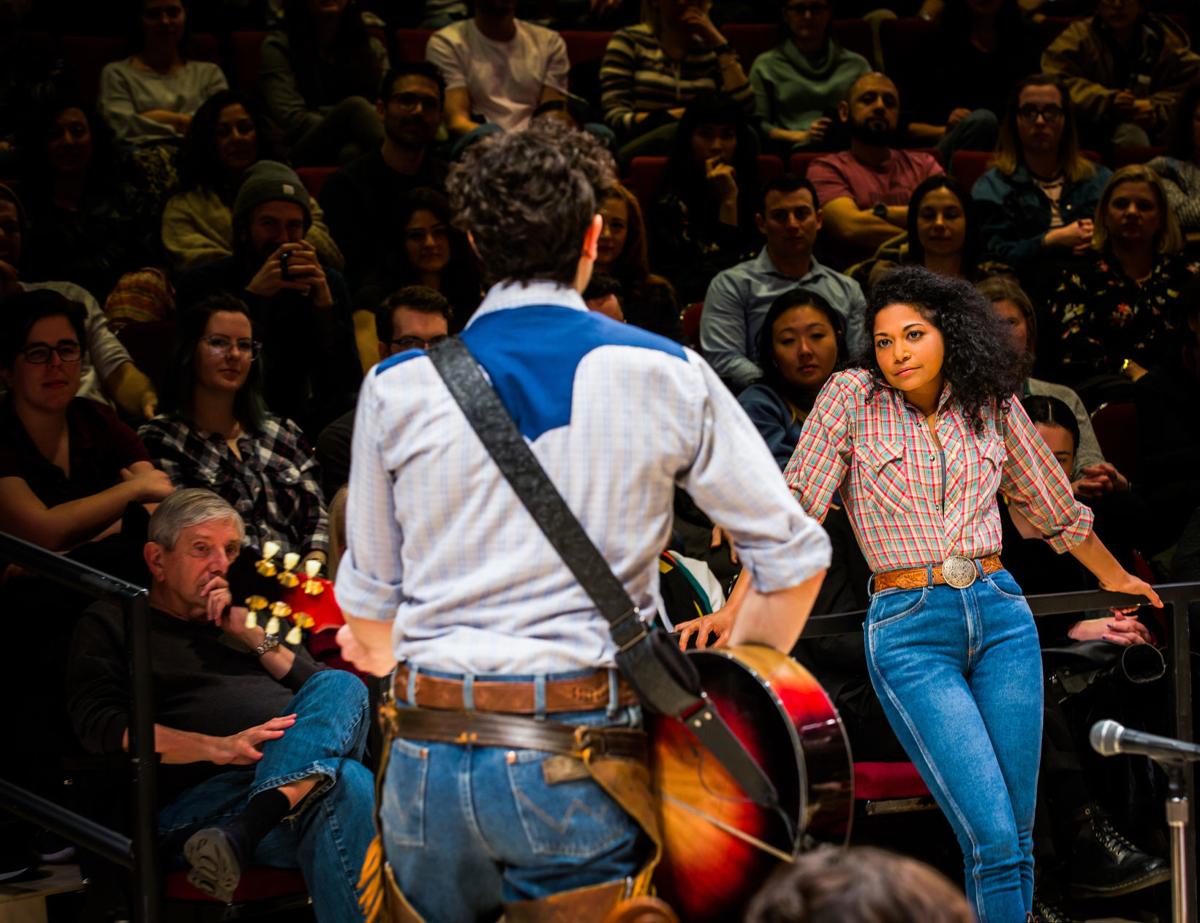 The exceptional Tony Award winning revival of Rodgers and Hammerstein’s Oklahoma may be closing its run on January 19, 2020 at Broadway’s Circle in the Square Theatre, but a tour will fittingly be opening starting in Oklahoma next fall, ultimately visiting other places in the United States and hopefully Canada.

The first collaboration between iconic Broadway duo Richard Rodgers and Oscar Hammerstein II, Oklahoma! premiered for the first time on Broadway in 1943. The musical is credited with being the first of its kind, integrating its book, score, and choreography with the goal of advancing the plot.

This revival serves as the Broadway debut of visionary director Daniel Fish, who has created a vivid re-imaging of this country-set classic. While he left the original text and score intact, he has managed to explore the plot through a 21st century lens, making an old story feel new and relevant again.

The cast of this darker Oklahoma! is led by Rebecca Naomi Jones as Laurey and 2019 Tony Award nominee Damon Daunno as Curly – both are in exceptional voice and have completely re-invented the roles. They are joined by 2019 Tony nominees Mary Testa (Aunt Eller) and Tony Award winner Ali Stroker (Ado Annie), as well as many other exceptionally talented company members.

The production has been hailed as Best of the Year and received a Critic’s Pick from the New York Times. Set in Oklahoma just after the turn of the century, the musical explores the complicated love story of Curly, an idealist of a cowboy, and Laurey, a stubborn farm girl, as they fall in love.

Those familiar with the original production will remember the 15-minute Dream Ballet sequence which once closed the show’s first act, a method of exploring Laurey’s romantic feelings and fears. In this revival, the sequence has been re-developed as an awe-inspiring modern dance sequence performed with dim lighting and frantic music. The room watched in a hushed silence as dancer Gabrielle Hamilton made her way across the floor.

Making the production all the more unique is the set itself. Performed at Circle in the Square, a small and circular theatre, audience members are truly immersed in the experience. Some lucky audience members even had the opportunity to buy tickets providing them seats directly on stage, where they were teased and flirted with by the characters throughout the show. Red Crock-Pots sit on the tables on stage throughout act one, labelled “hot”. Why? Because they are cooking the chili, which is served with corn bread to all audience members during intermission.

In particular, the show has received quite a bit of buzz for the casting of Ali Stroker in the role of Ado Annie, the comedic foil to Laurey and Curly’s love story. Stroker, originally discovered on Ryan Murphy’s reality TV competition “The Glee Project,” made history in 2015 as the first actress in a wheelchair to appear on a Broadway stage. Once again, she made history last year as the first performer in a wheelchair to receive a Tony Award. During her acceptance speech, she dedicated the award to “every kid who is watching tonight who has a disability, who has a limitation or a challenge, who has been waiting to see themselves represented in this arena.” No doubt about it, she truly is an inspiration. In addition to Stroker, blind casting in this production includes people of color in roles which were traditionally given to white people. Stroker’s wheelchair is given its own set of choreography but is in no way integral to the character. In fact, Stroker performs 5 shows weekly, with her fantastic understudy, Sasha Hutchings, playing the role for the three other shows. Hutchings does not use a wheelchair during the performance.

The 31-year-old Stroker has been paralyzed since the age of two following a car crash. After her Tony win, she was asked by a reporter how to make Broadway and theatre more accessible.

“The theatres for the house, where all the audience comes in, that is all made accessible to patrons,” Stroker said. “But the back stages are not. So I would ask theatre owners and producers to really look into how they can begin to make the backstage accessible, so performers with disabilities can get around.”

What sort of challenges does she face each day in terms of performing? “I leave home an hour and 45 minutes before curtain,” she explained. “The show has been so supportive of my needs, providing a car for me to get to and from the theater and helping me inside the theater. Because there are a lot of stairs at the theater’s main entrance, I go in through the office building next door, and then Circle in the Square put in a stair lift for me to get down to the dressing rooms and stage level. They also put in a ramp backstage so I can get around.”

I could not have been more impressed by Daniel Fish’s production of Oklahoma!. It is truly a brilliant feat worthy of celebration, and I felt grateful to have been in the presence of such talent and creativity.

Tickets are available at the box office (1633 Broadway at 50th), www.telecharge.com or by calling (212) 239-6200. See the website for more information: oklahomabroadway.com. The show runs for two hours and 45 minutes, including one intermission. Due to the mature content in this production, it is recommended for children ages 12 and up. This production contains fog, loud gunshot effects, moments of darkness, and violence.