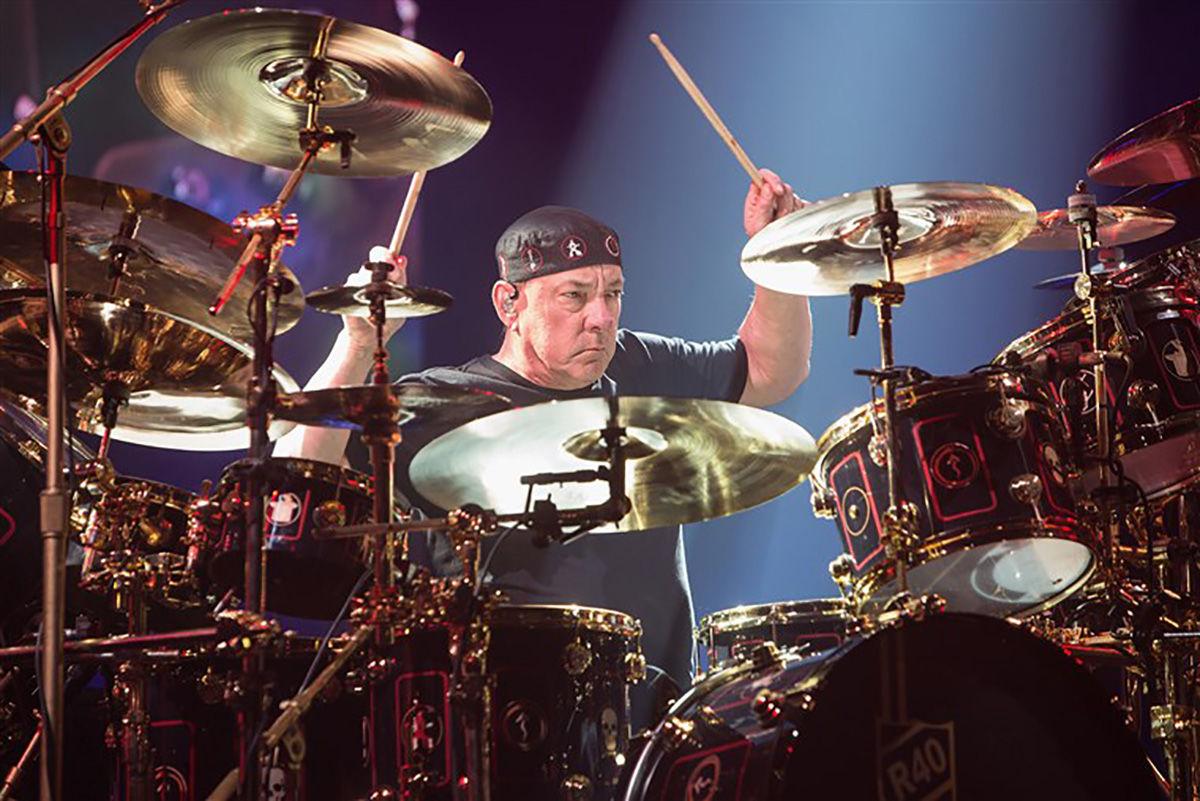 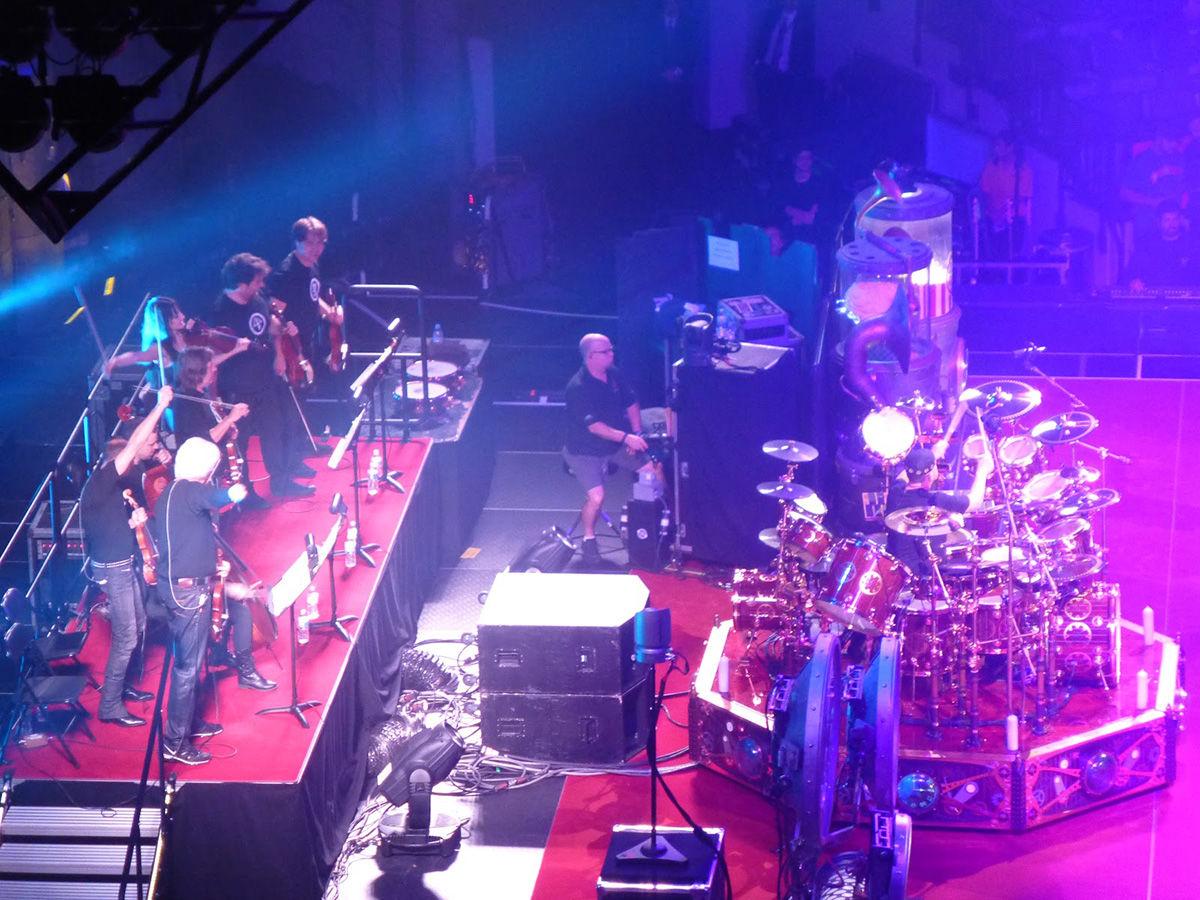 As the 15-minute intermission was winding up, I spied a line of extra heads luring in the shadows behind Peart’s massive drum set and wondered what the supposed roadies were up to 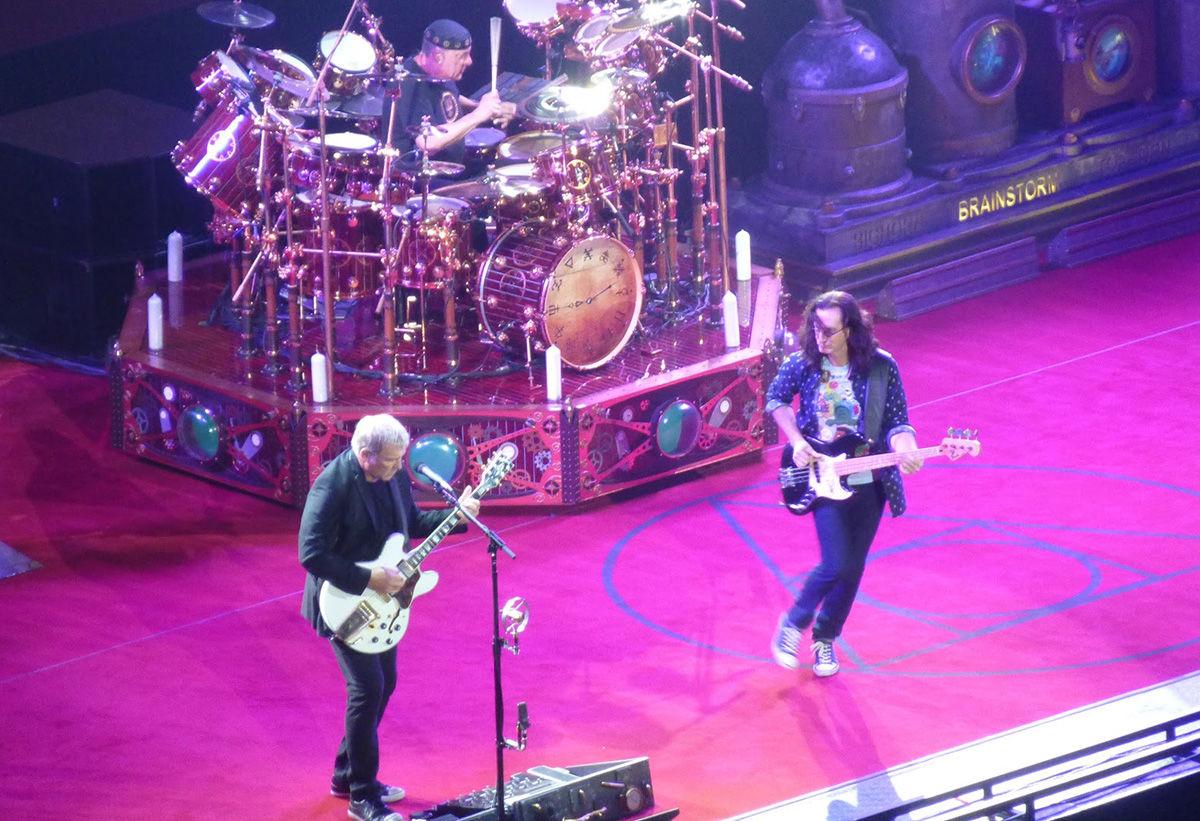 As the 15-minute intermission was winding up, I spied a line of extra heads luring in the shadows behind Peart’s massive drum set and wondered what the supposed roadies were up to

Hopping into the car for the drive home from on Friday, Jan. 10, I did my usual scan of the pre-set radio stations to hear what was on and when I got to CHOM-FM, which usually gets about 10 seconds of my time before I settle on NPR, I heard an old Rush tune. So I left it on 97.7. When a second Rush song was played I remembered that CHOM used to have a Two-for-Tuesday promo — maybe they still do. But since it wasn’t Tuesday I happily wondered what was up.

You might have guessed by now that I love Rush. Old Rush, to be specific. But when the second song ended, I heard the news. Drummer and lyricist Neil Peart was dead — at age 67.

Like many other fans, I was in shock. Because CHOM devoted the entire drive home playlist to the band’s repertoire, the next 45 minutes was filled with memories both happy and sad. So was the rest of the evening.

Below are two pieces that I wrote years ago for The Suburban: Confessions of an Early Rush geek (2010), a review of the then newly released documentary, Rush: Beyond the Lighted Stage, and Rush still rules!!!: Sorry, that’s the best headline this giddy, old-school fanboy can come up with (2012), written after their Clockwork Angels concert at the Bell Centre.

Confessions of an early Rush geek

If you happened to be at the old Montreal Forum on the night of December 27, 1978, and saw two gangly teens (one black, one white) sporting silk Japanese kimonos (one red, one powder blue) and each holding a cognac snifter filled from a concealed bottle of Rémy Martin VSOP cognac, well, that was me and my friend Zvonko.

We were there to see Rush, a band that we had looked forward to seeing since the last time they were in town some nine months earlier, and we didn’t care how silly we looked on the subway ride in. It was all about paying respect to the then-kimono-clad gods of prog-rock.

This distant memory came back a few days ago during the screening of Rush: Beyond the Lighted Stage, a new documentary about one of rock’s most influential bands. Formed in Willowdale, Ontario in 1968, Rush, believe it or not, ranks third for most consecutive Gold or Platinum studio albums — after only the Beatles and the Rolling Stones.

I attended my first Rush concert at the Forum on Friday, March 31, 1978. I know because I still have the ticket stub. And yes, they hit town twice in the same year. While many of my classmates were into the likes of Led Zeppelin, Pink Floyd, Genesis and Kiss, an awkward few, who would go on to become engineers, physicists, convenience store clerks, cartoonists and newspaper editors were into Rush. With their complex music, lyrics that spoke of mythology, space travel, black holes and philosophy, the band even introduced me at age 14 to the writings of Ayn Rand.

Sure they were made fun of and often dismissed by critics. It didn’t help that Geddy Lee’s voice often sounded like that of a cat caught in a blender. But so what?

The film also features never-before seen archival footage. Who knew the Lee and Lifeson families were prescient enough to film the moment a young Alex tells his family at the dining room table that he’s dropping out of high school? Or a young Geddy transforming the family basement into a practice room filled with long-haired suburban Toronto teens? “My parents thought I was probably a drug-taking freak,” says Lee, as a dated photo of him looking like a drug-taking freak appears on screen.

Beyond the Lighted Stage is interspersed with reflections and testimonials from some big name rockers, including Billy Corgan (Smashing Pumpkins); Trent Reznor (Nine Inch Nails); Kirk Hammet (Metallica); Gene Simmons (Kiss), as well as the quite looney Jack Black and the certifiably demented creator of South Park, Matt Stone,

The film also introduces us to some really hard-core fans. One goateed boomer gleefully boasts about seeing the band more than 100 times, which puts my eight pilgrimages to shame. In the film, Lee correctly describes Rush as “the world’s most popular cult band.”

My friend Zvonko still takes in the occasional Rush concert with his sons. Me? I let go in the late 1980s when the band began to experiment a bit too much with synthesizers and electric drums.

Ironically, that’s when I became a Depeche Mode fanatic

Rush: Beyond the Lighted Stage is now playing at Cinema du Parc.

Sorry, that’s the best headline this giddy, old-school fanboy can come up with

Thursday, Oct. 18 was a date long etched into the calendars Montreal-area Rush fans. In fact, every time the Rush caravan rolls into town, diehards as well as casual admirers flock to see and hear one of the greatest cultural exports this country has ever produced.

Set to begin at 7:30 p.m., with no act preceding them, the Toronto band arrived on stage at around 7:40, greeted by a Bell Centre packed to the rafters by a boisterous and appreciative crowd.

As has become common, the show kicked off with yet another one of the band's attempts at a humorous video featuring Montreal’s own Jay Baruchel starring as an uptight auditor and featuring the three band members in full makeup as waist-high gnomes.

To be honest, they lost me for awhile.

The focus immediately came back with the opening notes of Subdivisions, setting the tone for the night and putting a smile on thousands of faces. Vocalist and bassist Geddy Lee addressed the crowd after the third song, throwing in an appreciated smattering of Ontario French. “Bonjour! Merci a mes amis de Montreal. It’s a great, great pleasure to be back in Montreal, a city we dearly love. We’re happy that you came out tonight et Il y a beaucoup, beaucoup, beaucoup de chansons ce soir.”

Again, they lost me for awhile.

First-half highlights included some solo work from guitarist Alex Lifeson on Analog Kid, and an uncharacteristically short (two minutes) demo from arguably the best rock drummer in the world, Neil Peart. Instead, Peart broke his usual extended, set-spinning epic into three shorter versions spread throughout the evening. I mean, the man is now past 60 so I’ll cut him a load of slack.

For the casual Rush fan, the playlist during the first half of the show barely included recognizable hits — Closer To The Heart, Freewill, Limelight — but a selection of relatively obscure tracks, some they have not played in ages … for good reason.

I was first introduced to Rush in high school by a long-time friend who played the first side of 2112, an epic, sci-fi-inspired concept album released in 1976. I was transported to another world –- one that I would fully embrace for the next decade, buying every album, seeing every concert, and memorizing every lyric, guitar strum and drum paradiddle along the way.

But by 1984’s Grace Under Pressure, the 20-minute anthems that originally drew me in were long gone, replaced by the band’s attempt to get with the times, leaving behind their Yes and Zeppelin-infused pieces for seemingly shorter, catchier tunes …with bloody choruses for gawd’s sake.

I also moved on, but they were always there in the rear-view mirror. Fast-forward a couple of decades and they’re still around, filling arenas all over the world. And they had a brand new album called Clockwork Angels to showcase.

As the 15-minute intermission was winding up, I spied a line of extra heads luring in the shadows behind Peart’s massive drum set. Knowing from experience that this tight-knit three-man-band performs without backup musicians, singers or dancers, I wondered what the supposed roadies were up to.

Surprise! Rush enlisted a groovy eight-piece, head-banging string ensemble to provide the mood that Lee would usually do on his synth, leaving him the time to focus on his actual base instead of relying on the foot pedals. It was a nice, extremely unexpected touch that lasted through several songs and from what I heard, it's an album that I will surely purchase.

Clockwork Angels is a return to the concept album. Something about a watchmaker — which I’m sure is deep as hell and I’ll only know when I finally buy the album and pour over the lyrics like I used to do in my parent’s basement — dreamed up and penned by drummer and lyricist Neil Peart. Several of the album’s 12 tracks were presented to kick off the second half, all of them accompanied by the eight-piece orchestra.

The expected stage props featured a chicken roaster, washing machines and the time machines from past shows, a big horn from a gramophone record player, a fake (I think) brain wearing headphones and floating in a vacuum tube, an assortment of horns and a popcorn machine.

Like I said, the humour escapes me, but this is Rush, so even if I don’t get it, they get a pass.

After Peart's third drum solo, YYZ and The Spirit of Radio finished the main presentation, followed by Tom Sawyer and the usual truncated version of the 1976 epic, 2112.

After hearing only a segment of the boys (…err, aging men) playing it live for the ninth time, this boy (…err, aging fan) went home happy.